A status report on the so-called ‘Trump resistance’ has been hilariously visualized in a political cartoon by Ken Catalino.

A resistance movement marked by pink hats, college snowflake riots, and mass hysteria, has practically been run over during President Trump’s first 100 days in office. 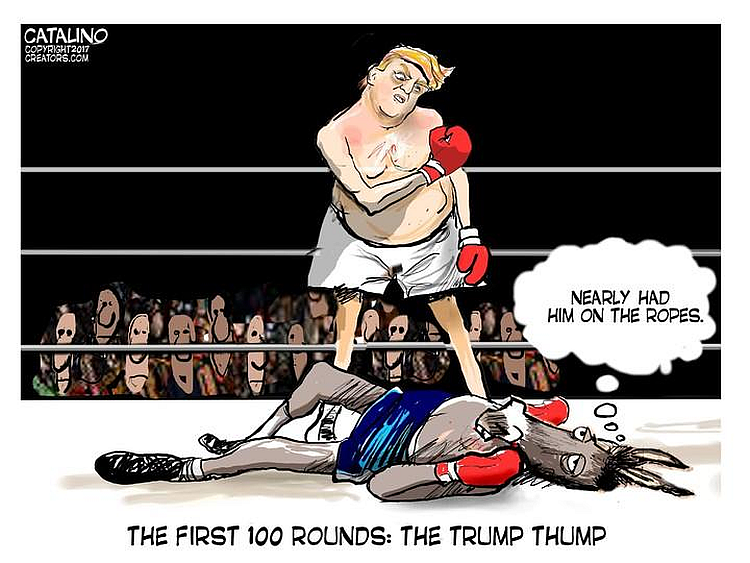 Indeed, the resistance, trying desperately to rekindle the kind of movement captured by the Tea Party or even the smaller scale, immeasurably less hygienic Occupy Wall Street movement, has mostly fizzled out.

Elections that were supposed to be barometers of the resistance movement both failed to capture a win for the Democrats. Kansas Republican Ron Estes won a special election in Kansas, while Democrat Jon Ossoff failed to avoid a runoff in a Georgia special election.

Aside from that, the President is doing things he promised he would do while he was on the campaign trail. A recent Los Angeles Times poll showed that a clear majority of Americans – 53 percent – believe the President is keeping his promises.

In the meantime, liberals will continue donning hats, dressing as female body parts, setting things on fire, and smashing windows – in other words, having a temper tantrum – as their only mode of success in this resistance.

We’ll be too busy enjoying the winning.

Is Trump beating back the ‘resistance’? Share your thoughts below.

Weekend Recess: Best Response to a Heckler Ever?