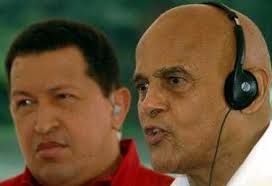 Somebody prepare my cell.

Enlightened Marxist Harry Belafonte was on with pal Al Sharpton this week. His advice for Obama was to imprison opposition like a “third world dictator.”

Warms your heart, doesn’t it?  Is there anything more American than imprisoning your detractors?  One can just feel the Christmas spirit.
Belafonte is known for making incendiary comments, such as his reference to former President George W. Bush as “the greatest terrorist in the world”, and another time where he painted Colin Powell and Condaleeza Rice as ‘slaves’ unable to speak out against their ‘master’.
If anybody would be familiar with how a third world dictator operates, it’d be Belafonte.  In 2000, he was a featured speaker at a rally in Fidel Castro’s Cuba, honoring the American Soviet spies, Ethel and Julius Rosenberg.  He has also consistently voiced his support for the socialist revolution of Venezuelan leader Hugo Chavez.
Tags
Al Sharpton George W. Bush President Obama