Democratic nominee Hillary Clinton lost the electoral college by a large margin, but the 2020 election season could feature a showdown between Clinton and Vermont Sen. Bernie Sanders.

The list of potential Democratic contenders for 2020 is growing, with Sanders and Clinton making the top of a list compiled by The Hill and International Business Times.

Clinton hasn’t addressed the issue, but her tweets immediately after the election results were published leave the door open for a rematch.

"This loss hurts. But please never stop believing that fighting for what’s right is worth it." —Hillary

“Let us have faith in each other. Let us not grow weary. Let us not lose heart. For there are more seasons to come and…more work to do.”

One tweet appeared to close the door for a Clinton candidacy, mentioning that “someone” would carry on the fight.

"We have still have not shattered that highest and hardest glass ceiling. But some day, someone will." —Hillary

Sen. Sanders also issued an order to Trump to listen to the working class families who elected him.

Mr. Trump, you talked about being the champion of working families. Now produce. But we won't accept racism, sexism or xenophobia.

Sanders also stated publicly that he was “humiliated” that the Democratic Party was unable to speak to the feelings of those who supported him during the primary.

Mr. Trump, you talked about being the champion of working families. Now produce. But we won't accept racism, sexism or xenophobia.

Both candidates are uncertain, but neither officially ruled out a run for the 2020 election season. Other potential challengers include Sens. Corey Booker and Kristen Gillibrand, as well as former Gov. Martin O’Malley and Sen. Tim Kaine, Clinton’s former running mate.

Next post By The Numbers: The Unprecedented Price Democrats Paid Under Eight Years Of Obama 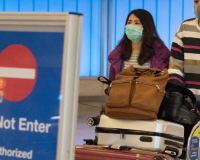 If CDC Believes US Coronavirus Outbreak Is “Imminent”, Why Have Only 400 People Been Tested?
February 26th, 2020 DC Dirty Laundry