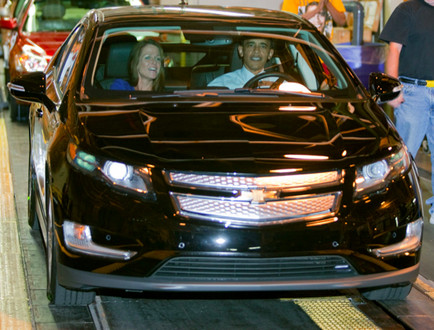 King Midas is at it again.  Everything he touches (the Volt, the entire U.S. economy) turns to a steaming pile of…

From the Detroit Free-Press:

General Motors has told 1,300 employees at its Detroit Hamtramck that they will be temporarily laid off for five weeks as the company halts production of the Chevrolet Volt and its European counterpart, the Opel Ampera.

“Even with sales up in February over January, we are still seeking to align our production with demand,” said GM spokesman Chris Lee.

Lee said employees were told Thursday that production would put on hold from March 19 to April 23.

The Chevrolet Volt, an extended-range electric car, is both a political lightning rod and a symbol of the company’s technological capability.

Flashback to earlier this week…

No Joke: Obama Vows To Buy a Chevy Volt … In Five Years…

In other words, he plans to buy a used Chevy Volt in five years because that POS isn’t going to make it.

President Obama, speaking to a raucous crowd of United Auto Workers, vowed to buy a Chevrolet Volt electric car in “five years” — just as soon as his presidency is over.

“I got to get inside a brand-new Chevy Volt fresh off the line,” Obama said about a recent visit to a Detroit Chevy factory. “Even though Secret Service wouldn’t let me drive it. But I liked sitting in it. It was nice. I’ll bet it drives real good. And five years from now when I’m not president anymore, I’ll buy one and drive it myself.”

The Volt is a plug-in hybrid electric car first demoed by Chevy in 2007.