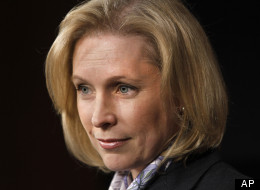 The following is a press release from Wendy Long’s campaign:

Gillibrand told the Poughkeepsie Journal Editorial Board that she would support raising or even eliminating the social security wage base (sswb) ensuring that middle income and small business owners especially those on Long Island, the Hudson Valley and the New York metro region will pay even higher taxes.

U.S. Senate candidate Wendy Long said, “Another day, another proposed tax increase from Senator Gillibrand. Many hardworking New York families look forward to that day when their Social Security payment ends and they get to take home a few more bucks of pay but Senator Gillibrand wants to make sure that day never comes for middle class and small businesses.”

Currently the Social Security wage base is set at $110,100. Gillibrand proposes to simply eliminate that cap entirely or eliminate it for those with incomes over two hundred fifty thousand dollars. Either way the impact on already burdened self employed, small businesses and middle – income taxpayers will be devastating.

Long added, “Self employed New Yorkers and small business owners who are already struggling to compete with the highest tax burden in America will be especially hard hit by this proposal. ”

Watch What Firefighters Just Did For President-Elect Donald Trump

Fox News Janice Dean: My Family Didn’t Have to Die – Cuomo’s Policy Made It Happen