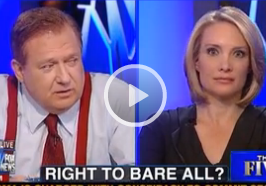 I’m at a loss.  Any ideas on why Bob Beckel, co-host of The Five, would explain away nudists by assuming they “were gang-banged” or “had sexual assault on them” as children?

Beckel usually let’s fly with some real winners when he starts shooting from the hip.  It does get him into some embarrassing situations.  For instance, this episode where he had the cast and crew in stitches trying to come up with the past tense for the word ‘tweet’.  For those not willing to click on the link, the word rhymed with ‘swat’.

Anyway, here it is via Mediaite:

During a Fox News segment on the ongoing fight over whether nudists should be allowed to walk the streets of San Francisco, The Five co-host Bob Beckel gave a rather colorful explanation for why people become nudists in their adult life.

The remarks came after co-host Dana Perino asked the table: “What happened to these people as children that they don’t want to wear any clothes?”

Andrea Tantaros said the nudists are “desperate for attention.”

“Most of them were gang banged probably,” Beckel chimed in. The two-shot camera showed Perino wincing in shock.

“I don’t know,” he continued over his co-hosts’ laughter and disbelief. “They could have had sexual assault on them?”

The camera stayed on him, as his co-hosts remained silent, and an irritated Beckel seemingly pushed back against the producers talking to him from the control room…

Bombshell: ABC Reports There Were No Protests Outside Libya Consulate Prior to Attack