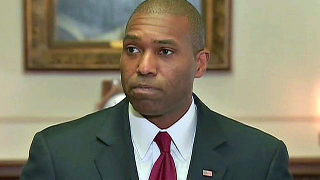 Not only did he defend admitted American terrorist John Walker Lindh, but Tony West is specifically in charge of developing U.S. policy pertaining to Guantanamo inmates.

A former Justice Department attorney who blew the whistle on his department’s policies is now questioning the promotion of a former defense attorney for an American terrorist to the No. 3 spot at the Justice Department — specifically charged with crafting U.S. policy on Guantanamo detainees.

J. Christian Adams, once an elections lawyer who accused the Justice Department of racial bias in its decision to not prosecute a voter intimidation case involving the New Black Panther Party, said Tony West’s promotion from assistant attorney general for the Civil Division to acting associate attorney general is one more step toward letting radicals run the Justice Department.

“The most dangerous thing is that West is overseeing Gitmo policy. It’s not that he’s just some guy at the Justice Department licking envelopes,” Adams told Fox News on Sunday.

Judicial Watch, a government watchdog group, noted that in Holder’s announcement of West’s promotion, he “conveniently omitted” West’s role as the defense attorney for convicted Al Qaeda terrorist John Walker Lindh, who is serving a 20-year prison sentence after being captured in Afghanistan in 2001 while fighting with the Taliban.

“He actually pleaded guilty to aiding the Taliban and carrying explosives while fighting U.S. troops in the region,” Judicial Watch noted of Lindh.

Unreal: Volunteer Utility Crews Turned Away in NJ Because They’re Not Unionized