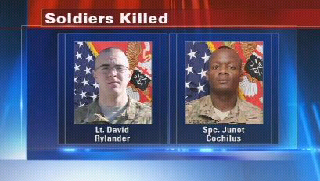 Governor Andrew M. Cuomo has directed that flags on state government buildings be flown at half-staff on Friday, May 11, in honor of two Fort Drum soldiers who died in Logar province, Afghanistan on May 2.

Specialist Junot M. L. Cochilus and 2nd Lieutenant David E. Rylander died of injuries sustained when insurgents attacked their unit with an improvised explosive device. Both soldiers were assigned to the 7th Engineer Battalion of the 10th Mountain Division’s 10th Sustainment Brigade, based at Fort Drum. Specialist Cochilus was from Charlotte, North Carolina, and 2nd Lieutenant Rylander was from Stow, Ohio.

“I join with all New Yorkers in mourning the loss of Specialist Cochilus and 2nd Lieutenant Rylander,” said Governor Cuomo. “We will honor the service of these two Fort Drum soldiers and we will be forever grateful for the sacrifice that they made for our nation. I send my deepest sympathies to their family, friends, and fellow soldiers.”

Gowdy on AOC’s Comments on Rise in NYC Crime : ‘Anyone Who Believes in Logic Will Take Issue with Her Stance’