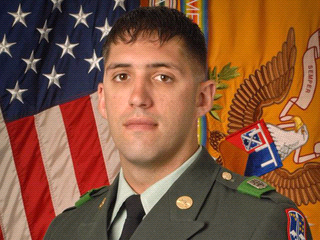 Governor Andrew M. Cuomo has directed that flags on state government buildings be flown at half-staff on Monday, April 2, in honor of a New York soldier who died in Afghanistan on March 26.

Staff Sergeant William R. Wilson III died in Paktika province as a result of wounds from small arms fire. He was a member of the 2nd Battalion, 28th Infantry Regiment of the 172nd Infantry Brigade, based in Grafenwoehr, Germany. Staff Sergeant Wilson was from Getzville, Erie County.

“On behalf of all New Yorkers, I extend my deepest sympathies to the family, friends, and fellow soldiers of Staff Sergeant Wilson,” Governor Cuomo said. “We will always be grateful for the service and dedication of this New York soldier.”

Flags to be Flown at Half-Staff for Trooper Amanda Anna

Senate Republican Tom Libous Convicted of Lying to the FBI