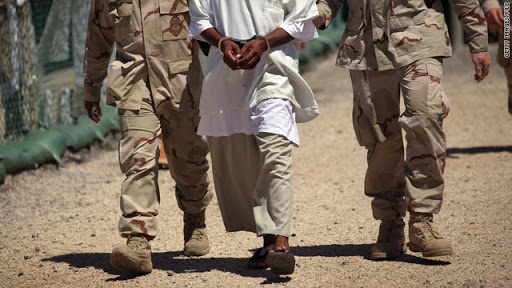 Ready for some jihadists to serve jail time in your backyard?
Via Fox News:

The Democratic chairwoman of the Senate Intelligence committee commissioned a federal report to identify prison facilities in the U.S. that are suitable for housing Guantanamo detainees, concluding the option is viable — despite congressional opposition to such a plan when the Obama administration proposed it.

Sen. Dianne Feinstein’s renewed interest in the proposal first came to light Wednesday after Fox News turned up an internal Government Accountability Office document that refers to “Source of Work: Ms. Dianne Feinstein, Chair, Select Committee on Intelligence, U.S. Senate” and lists the “Gist of Work” as an investigation into whether domestic facilities could house the approximately 170 detainees remaining at the controversial facility in Guantanamo Bay, Cuba.

Two hours after Fox News’ inquiry about the report, Feinstein’s office posted the report online and released a statement confirming that the California senator thinks the Obama administration’s controversial plan to relocate detainees to the United States is a viable option.

“This report demonstrates that if the political will exists, we could finally close Guantanamo without imperiling our national security,” Feinstein said. “The GAO report makes clear that numerous prisons exist inside the United States — operated by both the Department of Defense and the Department of Justice—capable of holding the 166 detainees who remain at Guantanamo in an environment that meets the security requirements.”

What could possibly go wrong?
It should be noted that the last time this idea was floated,  it received bipartisan condemnation.  For some reason,  Feinstein sees that as an opportunity to re–introduce the measure.
What do you think?
Tags
California Gitmo Guantanamo Bay President Obama Terrorists

Who Will Win the Iowa Caucuses?

Watch – If I Wanted America to Fail