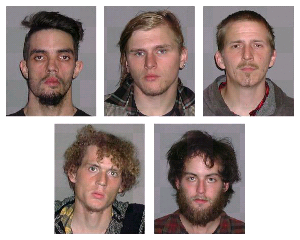 Looks like the media will continue to cover for Occupy Cleveland and their ties to the bridge bombing suspects.

Take a gander at these contrasting reports, posted at roughly the same time.

Five men described by the government as self-proclaimed anarchists entered not guilty pleas Monday to charges that accuse them of plotting to bomb a highway bridge near Cleveland.

The five will remain in jail until their next hearing, a federal magistrate said. A detention hearing scheduled for Monday was postponed.

The men were arrested last week when they allegedly tried to detonate what turned out to be a dud bomb provided by an FBI undercover informant.

The five had been associated with Occupy Cleveland, but organizers of the movement have tried to distance the group from the men. They say the five didn’t represent it or its non-violent philosophy.

Notice the inclusion of claims made by Occupy Cleveland that the group has nothing to do with the bombing suspects?

Now here’s a report from ABC-5 in Cleveland that throws water on the ‘we don’t want anything to do with them’ defense:

Dozens of members of Occupy Cleveland showed up at a Cleveland courthouse to support the five people charged in connection with an alleged plot to blow up a northeast Ohio bridge.

The suspects had the charges — conspiracy and attempted use of explosive material to damage physical property affecting interstate commerce — read to them in open court.

Now if you’re a member of a group who wants to place distance between yourself and alleged domestic terrorists, would you attend their court hearing as a show of solidarity?

Of course we already know that some of the suspects were indeed actively involved with Occupy Cleveland, and the AP should know this as well.  But they chose to ignore any mention of those ties.

Warner Todd Huston reported over the weekend that one of the suspects was actually named on the lease for the Occupy Cleveland headquarters.

In another story that should surprise no one, the Cleveland Plain Dealer reveals that the name of one of the Ohio bridge bombers nabbed by the FBI is so closely involved with Occupy Cleveland that his name appears on the lease of the rented warehouse they use for a headquarters. Instead of being ashamed, though, the Occupiers are mad at the FBI, apparently.

When stories about the late April arrest of five Ohio men who had formed a plot to bomb some key bridges in Ohio first surfaced, the Old Media called them merely “anarchists.”

It wasn’t long, though, before the New Media began to find out that they weren’t just any amorphous “anarchists,” but members of the Occupy Wall Street movement in Cleveland (Occupy Cleveland). No Old Media outlets reported this in the beginning despite how easy it was to find the facts.

OWSers initially denied this claim saying it was just a smear job on them but now the newspaper in Cleveland finds that one of the accused, Anthony Hayne, 35, signed the lease of the building the Occupiers use for an HQ.

No denying it now, eh OWSers?

They’ll continue to deny it.  And the media will help them with that denial.