Buttigieg to Illegal Immigrants: You Have Just as Much Right to This Country as Any American

WATCH: Trump Stops Rally to Honor World War II Vet Who Was Carried In To See Him

Did Democrats Tamper With the 2008 Election? 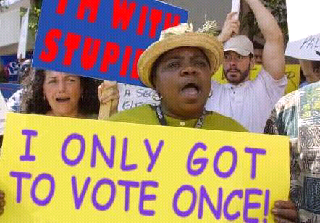 According to emails obtained by WikiLeaks, which is led by the embattled Julian Assange, Republican Senator John McCain’s 2008 presidential campaign staff allegedly had evidence that Democrats stuffed ballot boxes in Pennsylvania and Ohio on election night. However, the candidate chose not to pursue voter fraud, according to internal emails obtained from the private intelligence and analysis firm, Stratfor.

Stratfor regularly reports on geopolitics, narcotics, security and terrorism, particularly overseas. The company, which was founded by George Friedman, has high-level subscribers including at least one former U.S. Secretary of State, various foreign governments, and intelligence agencies. The U.S. Marines and the Department of Homeland Security are also customers. In recent months, Stratfor was in the news because a still unknown party hacked the Stratfor website and obtained subscribers’ names.

Why did McCain choose not to pursue voter fraud allegations?  Likely because, much like voter ID laws, it would have been perceived as racist.

Good to see things like this coming out nearly four years after the act.  As opposed to say, in 2008, when it actually mattered.

In an email sent on November 7, 2008, entitled ” Insight – The Dems & Dirty Tricks **Internal Use Only – Pls Do Not Forward **,” Stratfor vice president of intelligence Fred Burton wrote:

1) The black Dems were caught stuffing the ballot boxes in Philly and Ohio as reported the night of the election and Sen. McCain chose not to fight. The matter is not dead inside the party. It now becomes a matter of sequence now as to how and when to “out”.

Philly, eh?  Wonder if Eric Holder would be interested in investigating more of “his people”.

After discussions with his inner circle, which explains the delay in his speech, McCain decided not to pursue the voter fraud in PA and Ohio, despite his staff’s desire to make it an issue. He said no. Staff felt they could get a federal injunction to stop the process. McCain felt the crowds assembled in support of Obama and such would be detrimental to our country and it would do our nation no good for this to drag out like last go around, coupled with the possibility of domestic violence. The Nov. 7 email also contains allegations that Democrats made a “six-figure donation” to Rev. Jesse Jackson to silence him on the topic of Israel after an October 2008 interview in which he said Obama’s presidency would remove the clout of “Zionists who have controlled American policy for decades.”

Next post Obama Really Has Delivered on Immigration Reform

Assange Has ‘Incontrovertible Evidence’ That Will Destroy Democrats Once & For All Suggests Rep Dana Rohrbacher
February 21st, 2020 DC Dirty Laundry

WATCH: Trump Stops Rally to Honor World War II Vet Who Was Carried In To See Him
February 21st, 2020 The Mental Recession

‘Mike would have dinner parties and piss all over Obama when he was president’
February 21st, 2020 Liberty Unyielding