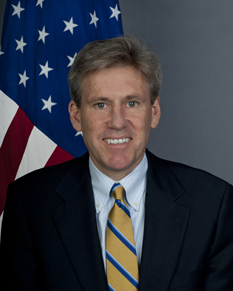 Citing an unnamed but mysteriously close source on Wednesday, CNN’s Anderson Cooper reported that Christopher Stevens was concerned about security threats, Islamic extremism, and an al-Qaeda hit list in the months leading up to the attack on the U.S. Consulate in Benghazi.

Two days later, Cooper admitted that some of the information from that report secretly came from Stevens own handwriting, in a seven-page personal journal that the network had found at the scene of the attack.

In Cooper’s own words:

‘On Wednesday of this week, we reported that a source familiar with Ambassador Stevens’ thinking said in the months before his death, Ambassador Stevens talked about being worried about what he called the never-ending security threats in Benghazi,’ Cooper told his viewers Friday night.
‘We also reported that the ambassador specifically mentioned the rise in Islamic extremism, the growing al Qaeda presence in Libya and said he was on an al Qaeda hit list.

‘The information for that report, like all of CNN’s reporting, was carefully vetted.  Some of that information was found in a personal journal of Ambassador Stevens in his handwriting.

If we are to believe that there is a separate source that has channeled Stevens’ thinking, along with Stevens’ actual thinking, and we take CNN at their word that only ‘some of that information’ came from the journal (which is difficult considering they pretended they didn’t have the journal in the first place), that leaves us with this basic fact…

There were three things Stevens feared leading up to the attacks:  Security threats, Islamic extremism, and al-Qaeda.

Therefore the journal, and Stevens’ own handwriting, had to have specifically mentioned at least one of these three items – security threats, Islamic extremism, or al-Qaeda – as being a concern.

But oddly enough, no mention of an obscure anti-Islam video on YouTube.

Despite having this information straight from the source, CNN is still insisting the attacks in Benghazi occurred because of the movie.  Earlier today, in a wire report that actually explained how CNN obtained the Stevens journal, the network continues to place blame on the anti-Islam video.  Witness these three sequential paragraphs (emphasis mine):

For CNN, the ambassador’s writings served as tips about the situation in Libya, and in Benghazi in particular. CNN took the newsworthy tips and corroborated them with other sources.

A source familiar with Stevens’ thinking told CNN earlier this week that, in the months leading up to his death, the late ambassador worried about what he called the security threats in Benghazi and a rise in Islamic extremism.

Stevens died on September 11, along with three other Americans, when the U.S. Consulate in Benghazi came under attack amid a large protest about a U.S.-made film that mocked the Muslim Prophet Mohammed.

Even prior to that, CNN was reporting on Friday that Hillary Clinton had flatly stated there was no information suggesting that Ambassador Stevens believed he was on an al-Qaeda hit list.  In that report, the network cited the aforementioned ‘source familiar with Stevens’ thinking’ but never felt it necessary to argue Clinton’s point – remember Cooper’s report claimed that Stevens “said he was on an al-Qaeda hit list” – by mentioning that they had actual handwriting from Stevens that suggested otherwise.

Of course, this is the same network that published an opinion piece after all of this had come to light which states, ‘Protests are as mindless as anti-Islam film’.

No, no they are not.

Equating the ‘protests’ to the anti-Islam film would only be appropriate if people actually died during the filming.  As if to accentuate the point, the author refers to the ‘protesters’ as mindless and criminal, while calling the video’s producers extremist and criminal.

As for referring to the attacks as ‘protests’ we prefer the more accurate description – pre-planned terrorist attacks.

Honestly, if you can’t even discern basic differences such as those, you should take your writing to a second-rate network like CNN.

Must Watch Video: Obama Too Cool to Rule