While the Cuomo administration has experienced what some would call an historic term in office, one aspect contributing to that description has been the Governor’s insistence that New York is open for business, promoting a new business-friendly atmosphere in the Empire state.

Just a few weeks ago, the governor had this to say about conducting business in New York:

“The focus of the administration has always been and will continue to be making New York work to help create jobs and grow businesses in every region of the state.  In the spirit of entrepreneurial government and through our New York Works initiatives, we have positioned the state as a partner to the private sector to encourage billions of dollars of new investment in nanotechnology and other growth industries.”

It was less than a year ago that Cuomo launched a new marketing initiative called, “New York Open For Business”, which according to a press release, had the following aim:

In recent years, businesses have left the state in record numbers and job losses have devastated local communities, giving New York the image of having one of the worst business climates in the nation. The goal of the “New York Open for Business” initiative is to promote the many assets of investing in New York so the state can regain its reputation as a business-friendly location.

Those efforts to regain the state’s reputation as being business-friendly were to involve spending anywhere between $10 and $50 million.

According to a new report from CNBC however, the state has plummeted eight spots overall in a list of America’s Top States For Business 2012.  The list ranks all 50 states in categories they use to sell themselves to businesses.  New York dropped from the previous year’s rankings in 6 of the 10 categories … including business-friendliness.

Overall, the Empire state dropped from 26th to the 34th top slot for business.  In the individual categories, New York saw a decline in Quality of Life, Economy, Business-Friendliness, Access to Capital, Cost of Living, and Infrastructure & Transportation.  The latter category seeing the most dramatic loss, going from 14th in the nation to 39th. 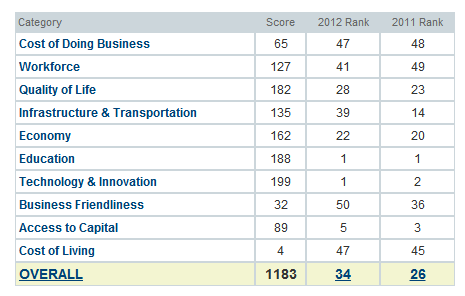 The numbers are strikingly similar to David Paterson’s term in office in 2009, before he improved them in the 2010 election year. 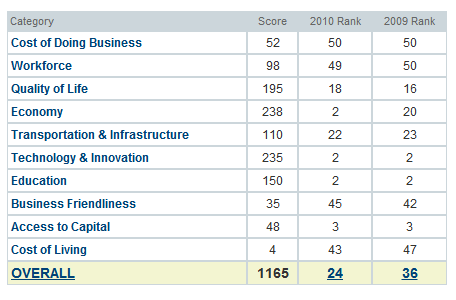 According to CNBC’s report, the business-friendly numbers have declined in each year since Cuomo’s election in 2010.
The news wasn’t all bad however, as New York ranked first in the nation for Education, and Technology & Innovation.

Curiously, when looking at the overall list, states with Republican governors dominated as having reputations that are considered business-friendly.  According to Human Events:

You’ll also notice similarities between states that rank high on the CNBC list — namely that most of the leadership in those states supports economic policies that mirror the national Republican platform.

Here are the top 20 most-friendly business states according to CNBC:

Seven out of the 10 states featured in the top 10 have both Republican governors and legislatures.  By contrast, within the bottom dwellers, six of 10 have Democrat monopolies on state government.

This, after another report showed that every single one of the 17 states that elected a Republican governor in 2010, saw a drop in their unemployment rates.

By contrast, during that same time frame the unemployment rate in New York has climbed.

Looks like Governor Cuomo has some more work to do to reach those sought after historic levels.

Report: Gillibrand’s Claim That Her Website Serves as an Independent Organization is a Sham