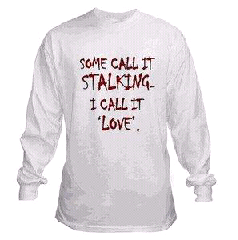 Politico is reporting on a disturbing new trend, in which Democrat campaign staffers are going to Republican official’s homes with camera in tow, and posting the video on the internet.

Politicians recognize they give up a degree of privacy when they run for office.

But Democrats are testing the outer limits of that understanding with a practice that raises questions about when campaign tracking becomes something more like stalking.

While most serious campaigns on both sides use campaign trackers — staffers whose job is to record on video every public appearance and statement by an opponent — House Democrats are taking it to another level. They’re now recording video of the homes of GOP congressmen and candidates and posting the raw footage on the Internet for all to see.

That ratcheting up of the video surveillance game is unnerving Republicans who insist that even by political standards, it’s a gross invasion of privacy. Worse, they say, it creates a safety risk for members of Congress and their families at a time when they are already on edge after a deranged gunman shot former Arizona Democratic Rep. Gabrielle Giffords 18 months ago.

Yes, privacy is diminished when running for public office, but this goes beyond any acceptable level of decorum.  Politico’s assertion that this somehow blurs the line is false however.  There is no question that the line has been crossed – these actions are flat-out stalking.

The report even goes on to interview a congressman who was videotaped while shopping for groceries, another who had people crouching in their bushes, and another who had video of their parents home publicly posted.

The most shocking aspect of the report isn’t simply the act of stalking political opponents.  While you and I might see these videos and become unnerved about their potential use by somebody with a deranged agenda, the Democrats think otherwise – they insist it is all fair game.

They say showcasing the homes — most of which are spacious and neatly maintained —underscores what will be a key avenue of attack for the party this fall: communicating that Republicans just can’t relate to economically struggling voters.

“House Republicans have spent this entire Congress trying to hide that they’re protecting benefits for millionaires and perks for themselves instead of protecting the middle class, but we won’t let them keep it secret any longer,” Democratic Congressional Campaign Committee spokesman Jesse Ferguson wrote in an email.

Democratic officials said placing the videos on the DCCC’s website and YouTube serve a useful purpose, most notably making the footage available to friendly outside groups for use in TV commercials. That way, they don’t violate laws against coordinating with those groups.

Oh the horror of a spacious and neatly maintained home!

It’s unclear how videotaping somebody grocery shopping demonstrates a willingness to protect benefits for millionaires while leaving the middle class to fend for themselves.

Call it what it is … Democrats have turned to stalking in a desperate attempt to win elections.

Unemployment Back Over 8%, This Time IT MUST be the Previous Administration’s Fault

Obama Senior Advisor Won’t Answer ‘Are We Better Off Than We Were Four Years Ago?’