Apparently this is real.

California Democrat John Burton, who has recently come under fire for comparing Republicans in general, and Paul Ryan in particular, to Nazi propagandist Joseph Goebbels, has left the building at the Democrat National Convention. 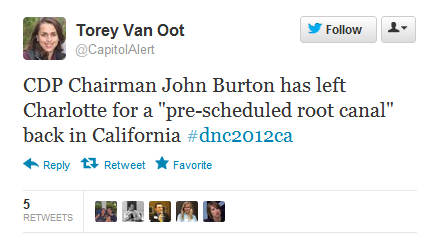 Pre-scheduled root canal?  If it was pre-scheduled, and such an absolute emergency that Burton needed to attend, then why head to Charlotte in the first place?
More like the Democrats told him to get out.  Which is far more than Nancy Pelosi did after hearing his ‘Republicans are Nazis’ diatribe.
Tags
California DNC Nancy Pelosi Paul Ryan

A Complete List of Historic Firsts For Our President

Report: Despite Multiple Pleas From Officials, Obama Administration Pulled 34 Security Personnel From Libya Prior to Attack