The Political Insider reported that a Democrat Massachusetts lawmaker tipped off illegal immigrants to a potential raid by Immigration and Customs Enforcement (ICE) – but one sheriff won’t remain silent.

Earlier this week, MA state Rep. Michelle DuBois said she received information of a potential illegal immigrant ‘raid’ from a “friend in the Latin community.”

“I have a message for the immigrant community of Brockton,” she wrote. “Please be careful on Wednesday 29. ICE will be in Brockton on that day.”

“If there is a knock on the door of your house and you don’t know who it is, don’t open the door,” she warned.

DuBois also posted a chart full of tips for illegal immigrants should an ICE agent “come to your door.” 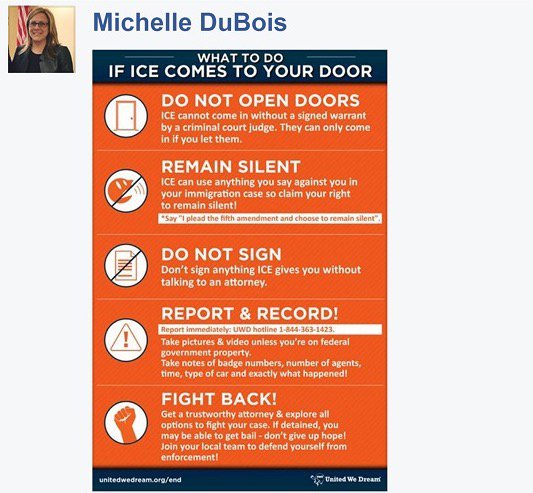 But she isn’t getting away with it scot-free.

Bristol County Sheriff Thomas Hodgson appeared before a Congressional panel and called for elected officials who aid in creating ‘sanctuary city’ policies to be arrested.

He used Dubois’ post as an example of how some Democrat lawmakers are “undermining my job and every other law enforcement officer in the United States.”

Hodgson said what DuBois did was “irresponsible” and she “ought to be ashamed of herself.”

Watch the sheriff’s testimony below …

Hodgson told Neil [Cavuto] that he “can’t think of anything more irresponsible than what [DuBois] did. She ought to be ashamed of herself. She should be looked at for a minimum of ethics violations.”

Hodgson added there might already be an investigation of DuBois ongoing.

“I’m sure there’s some review of whether or not she compromised some investigation involving ICE,” he said.

DuBois updated her Facebook post after Hodgson’s testimony, actually hinting that posting a tip to illegal immigrants about an upcoming ICE raid was for the benefit of ICE itself.

“Having ICE know that this rumor is wide-spread in Brockton allows them to change the date if they feel the public’s knowledge of the raid would undermine their planned raid,” she claimed.

“So I do not agree with Sheriff Hodgson on his point that he made before a federal panel in WashingtonDC that my public facebook post in anyway undermines law enforcement.”

Do you think the Massachusetts Democrat should be investigated for tipping off illegal immigrants to a potential ICE raid? Tell us what you think below.

Rashida Tlaib: Critics Are ‘Racist Idiots’ Who Need to Be Spoken to Like Fourth-Graders

Harry Reid on Helping Kids With Cancer: “Why Would We Want to Do That?”