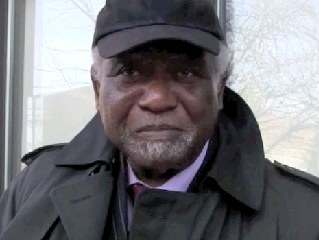 Love how Democrats always ‘flee the scene’ when confronted with something questionable.

“He is one on the greatest congressmen in the country,” said President Obama. The reason, Obama told a Teamsters union rally in 2004, “is because he shares our values.”

At that time—just eight years ago—Congressman Danny Davis was continuing his efforts to help move then-State Senator Obama up the Chicago political food chain. And not that long ago—in fact, just two weeks—that Congressman Davis was honored by People’s World,a news website, at the Communist Party U.S.A.’s headquarters in Chicago for a lifetime of “inspiring leadership.”

Upon receiving the People’s World “Chris Hani & Rudy Lozano Social Justice Award,” Davis reflected, “Rudy Lozano and I worked closely together to try and build and a relationship between Latino and African-American activists and union types… we called ourselves ‘Progressives.’”

Congressman Davis, a member of the House Committee on Homeland Security,was filmed receiving his award and exiting the Communist Party U.S.A. headquarters in Chicago on March 4, 2012. When questioned about his relationship with the Communist Party, Davis abruptly fled the scene, refusing to answer any further questions apart from the following exchange: