I was watching the debate last night with my wife and daughter.  At ten years of age, she does occasionally surprise with her interest in current events.

She sat quietly as bed time approached, with quiet being a rarity at that time of night, and listened as Juan Williams injected race into a question about hard work.

Speaker Gingrich, you recently said, “Black Americans should demand jobs, not food stamps.” You also said, “Poor kids lack a strong work ethic,” and proposed having them work as janitors in their schools. Can’t you see that this is viewed, at a minimum, as insulting to all Americans, but particularly to black Americans?

We then watched as Newt skillfully responded, defending his stance:

Juan, the fact is that more people have been put on food stamps by Barack Obama than any President in American history. I know among the politically correct you are not supposed to use facts that are uncomfortable.

I believe every American of every background has been endowed by their creator with the right to pursue happiness, and if that makes liberals unhappy, I’m going to continue to find ways to help poor people learn how to get a job, learn to get a better job and learn some day to own the job.

Off to bed she went…

The Gingrich response may prove to be a pivotal point in the debate, or it may not.  But it clearly left an indelible mark on my daughter.  The following day she penned a letter to whoever may serve as the next President of the United States.  In it, she wrote:

In Social Studies, we are learning about how the patriots put in the hard work to change America, even in the most difficult of times

Hard work – a universal attribute of Americans.  Not blacks, not whites – Americans.

Do you get it now, Juan? 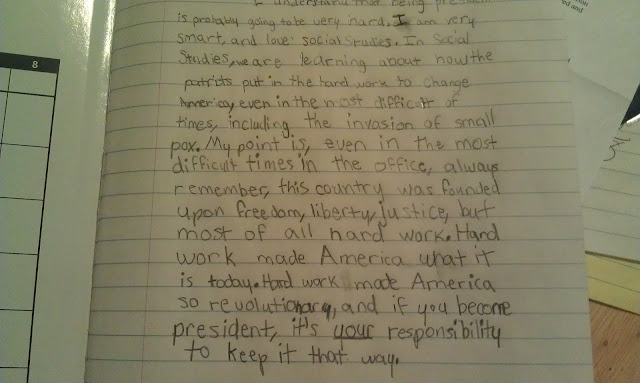 Weekend Recession: (Video) What NOT to do on St. Patrick’s Day