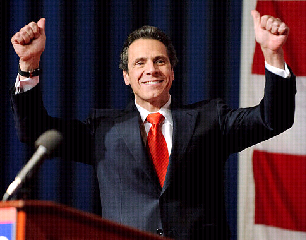 Looks like it’s time to hand Governor Coumo a pocket thesaurus to use when describing his administration.  He seems to be stuck, a broken record of sorts.

Thomas Kaplan of the New York Times has reported that Cuomo’s repetitive use of the word ‘historic’ has been … well … historic.

How can New Yorkers know for sure? Mr. Cuomo says so — and has almost every week since he took office 16 months ago.

On his fifth day in office, he challenged lawmakers to “write a new page in the history book of New York State government,” and his administration has done just that more than 80 times, judging by the number of press releases issued by his office that described one of the governor’s actions as historic.

Sometimes the accomplishments seemed destined for some history books, like the legalization of same-sex marriage. But the governor has called a loan program for energy-efficient home improvements historic, as well as the creation of a new application process for economic development grants. The establishment of a Medicaid spending commission? That was historic, too.

“There’s that word again,” one Albany reporter, Liz Benjamin of the YNN cable network, noted as she live-blogged a news conference last year.

When he’s not struggling with word creativity, it seems the narcissist is busy trying to stalk any reporters that might not have a favorable view of the Governor.

A report last week had surfaced that Cuomo and his aides had created a 35 page ‘dossier’ on Albany political reporter, Elizabeth Benjamin, for the perceived crime of being ‘generally snarky’.

A top aide to New York Governor Andrew Cuomo assembled a 35-page dossier on the work of an Albany political reporter considered hostile to his administration, highlighting any shred of criticism in a document that reflects the intense sensitivity of a governor on the brink of taking the national stage.

The document was provided to BuzzFeed by a New York Citypolitical operative who said he believes it reveals Cuomo’s “scary dark side.” And the document does offer a glimpse into Cuomo’s obsessive and often difficult relationship with the media who cover him. Communications Director Richard Bamberger, who acknowledged preparing the document, called it “meaningless” and “garbage,” while warning that its leak set a “dangerous precedent.”

The file, composed of highlighted and annotated blog items by Elizabeth Benjamin, one of Albany’s dominant political reporters, paints a picture of an executive branch that’s particularly averse to hints that Cuomo could be, as is widely assumed, considering running for president in 2016. The document focuses particularly on seven items it describes as “GENERALLY SNARKY”…

… Other sections of the document highlight any language that could possibly be interpreted as critical of Cuomo, much of it innocuous by most standards: The highlighted passages include Benjamin characterizing the Governor’s phrase “celebration on 9/11” as “an interesting choice of words” and her writing that he “declined to put even a ballpark figure on the cost of storm clean-up.”

Seven of the items are labeled “GENERALLY SNARKY”; an eighth, about parking placards, is given as an “Example of poor reporting/Inadequate fact-checking before distribution.“

You almost get the impression of a man constantly looking in the mirror, having to remind himself just how great he is.