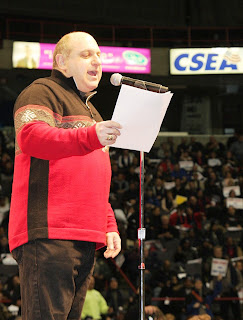 The interview started off with the pat union response for their defeat in Wisconsin – the election was bought.

The premise is a false one, but one that those who supported the recall of Scott Walker have to make.  Otherwise, they would have to admit that the embarrassing defeat was a referendum on their policies and platforms, something they can’t seem to come to grips with.

Madarasz continued to push that theory, bitterly stating that campaign cash was the only reason that Walker was victorious.  But a report in the Wisconsin State Journal late last month indicates the contrary.  The results of that report state that an “analysis of the money that has flowed into all state campaigns and political groups since Walker took office suggests backers of the two major political parties have competed on an unusually level playing field.”

What was even more interesting perhaps was when host Chuck Custer asked Madarasz if he could understand the public’s frustration with union representatives fighting the call for greater contributions to healthcare costs, something more in line with the private sector.

“Oh we absolutely understand that.  We also understand that the public really doesn’t have a clue when it comes to the reality of what that’s all about.”

Madarasz himself didn’t seem to have a clue what the question was all about, as evidenced by this exchange:

Madarasz:  “The fact of the matter is that the vast majority of our members do contribute to their health insurance and always have.”

Custer:  “But I mean as much as the average person?”

Madarasz:  “I think the sad commentary is that we have a real healthcare crisis in this country and part of this right-wing agenda that we’re seeing right now is going after the President on trying to have a plan that’s going to help people across the country.”

Nice use of the dodge right there.  Instead of addressing the issue of union members paying into their healthcare – the specific topic of the question – Madarasz went off on an Obamacare and ‘right-wing agenda’ tangent.

That said, this is another example of the union leaders having to avoid facts and instead provide falsehoods, or in this case, simply change the subject.

The Manhattan Institute for Policy Research released a report last year showing that public employees not only contribute far less to their health insurance premiums than the private sector – 15% as opposed to 25% on average – but that their plans also provide more generous benefits, and require lower deductibles and co-pays.

But then, the public wouldn’t have a clue about that.