On Thursday we ran into some scheduling difficulties that prevented our arrival on the first day, but had anticipated arriving for the after party known as BlogBash.

On Wednesday night I received this message in an e-mail concerning the BlogBash party on Thursday night:

Dress to impress. We know you spend a majority of your blogging-life eschewing pants, so look at this as an opportunity to show everyone what you’ve got… or cover what you haven’t got with a nice suit…
Well, wear what you want, but hint hint.

On Thursday night, somewhere on the Delaware Memorial Bridge, you may have seen a man on the side of the highway, on his knees like Tim Robbins in Shawshank Redemption, yelling “NO!!!!!!”

I forgot to pack pants.

We missed a majority of the party because we had to go pants shopping.

Friday was a much better day.  We armed ourselves with our media credentials and set about exploring every opportunity that we came across. 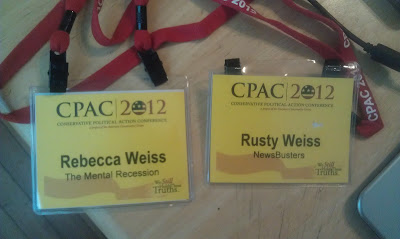 Most of the time was spent in awe – in awe of the public figures that were in attendance, in awe of the sheer amount of information and events that were taking place, but more so in awe of the bloggers in which I shared a lounge area called Blogger’s Row.  I quietly observed as such renowned bloggers as Warner Todd Huston, Seton Motley, Jeff Dunetz, Lachlan Markay, Javier Manjarres, Brian Garst, and on and on.  It was a who’s-who of political bloggers, and it had me thinking of my own contributions.  From a ‘who’s-who’ to just plain ‘Who?’
CPAC also featured the cream of the crop in political activism – people like Tabitha Hale, Anita Moncrief (she is absolutely as sweet a person as everyone says), Bill O’Connell, Ali Akbar, etc.
And there was also a group of people that I wish I had the chance to meet, or had more time to interact with – Maggie Thurber, Jeff Quinton, Pamela Geller, Matt Sheffield, and so many more.
What is for sure is that there is still a level of divide between so-called mainstream journalists, and the bloggers that work so hard to bring you the real news.  It is not a tangible divide but rather, a perceived divide, an animosity between the ‘real’ journalists and bloggers, a disdain.
This was evident at one point when several reporters came into the room to interview Allen West, essentially taking over the bloggers time to speak with him and to ask their own questions.  This was personified at one point when a woman who was watching the entrance to the Blogger’s Lounge told several reporters and cameramen from C-Span that they had to leave.  One journalist sneered at her and said, ‘Do you not want us to cover your event?’  Covering the event is one thing, but trying to sneak past to gain access to interviewees is wrong.  Show some respect.
Without further rambling, here were some highlights from CPAC 2012..
Allen West:
West delivered what I consider to be the best speech from a politician at the event.  This man is a great American, and he will be President one day in my humble opinion.
Highlights from his speech include these statements:

“If Americans take time to think about what they truly believe, they will find out they are conservatives.”

“It is the liberal philosophy, not the conservative one, that views humans as selfish automatons.”

“Liberals worry that what’s best for the individual might not be better for the public at large.  But that philosophy assumes something vicious about each and every one of us. It assumes we only care about ourselves.”

And this one that got West a well-deserved standing ovation…

“Of course we have compassion. We just don’t believe the safety net should be used as a hammock.” 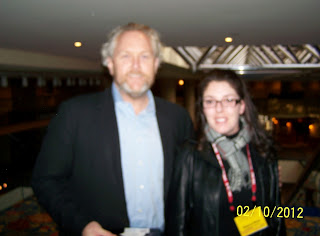 When Breitbart came out and the first thing out of his mouth was “Where are you, you Occupy freaks, with your glitter bombs?” we all knew we were in for a good speech.  See, Breitbart says what a lot of people think in regards to liberals, the mainstream media, and the Occupy movement, but don’t have the courage to say it.
But beyond the fiery delivery, beyond the ‘I don’t care’ attitude that Breitbart exudes, he made an incredibly important point about the upcoming election.

When I walk through CPAC or a I travel the United States to meet people in the Tea Party who care – black, white, gay, and straight – anyone that’s willing to stand next to me to fight the progressive left, I will be in that bunker.

And if you’re not in that bunker because you’re not satisfied with [a certain] candidate, more than shame on you! You’re on the other side!

Period, end of story.  I grow weary of constantly hearing conservatives say they will never vote for Candidate X because of Issue Y.  Look at who is in the White House right now.  If you’re not voting for Candidate X, then you might as well hand over your vote to President O.
Go here for a full transcript of Breitbart’s comments, it truly is a must read.
Rick Santorum: 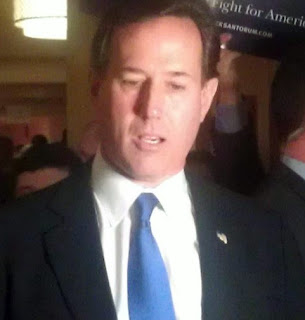 Santorum pushed his case as the lone true conservative on the GOP side, launching subtle attacks at the the presumed inevitable candidate, Mitt Romney.

“We won in 2010 because conservatives rallied.  They were excited about the candidates who were put forth.  Why would an undecided voter vote for a candidate of the party who the party’s not excited about?”

He did not apologize for his conservatism…

“We will no longer abandon and apologize for the policies and principles that made this country great for a hollow victory in November.”

“The major reason I’m in this race is because I think Obamacare is a game changer for America.”

And he blasted the administrations attempts at forcing Catholic hospitals and churches to pay for things that go against their morals and beliefs, a stance that brought about a massive standing ovation… 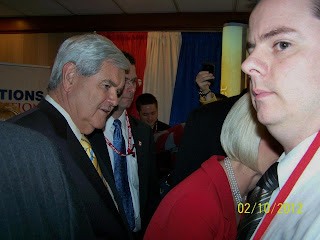 Newt’s speech was the most specific of all the Presidential candidates.  He outlined a long list of items he would tend to on the very first day of his Presidency.  While most were content with speaking in catch phrases or bumper sticker slogans, Newt offered a plan.
Via the Huffington Post:

Gingrich talked for at least five minutes about which of President Barack Obama’s policies he would undo if elected to the White House, and summed it up this way: “We will have repudiated at least 40 percent of his government on the opening day.”

Further, in a clear shot at a Republican party all too ready to compromise or flat-out rollover to the administration’s strong arm tactics, Newt said…

“We need to teach the Republican establishment a lesson… We are determined to rebuild America, not manage its decay.”

Obama started that decay, will it be reversed in 2012? 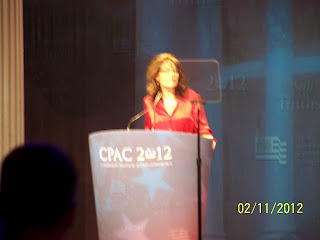 Before a jam-packed crowd, with hundreds more watching on monitors in the convention center hallways and overflow rooms, Palin attacked the Obama economic agenda from many angles.  She delivered the CPAC keynote speech, bringing down the house with a awe-inspiring gems…

“We will never apologize for America’s strength and our greatness… we refuse to accept that a weak America means a better and safer world.”

“The president says small-town Americans, we bitterly cling to our religion and our guns because we’re just doggone frustrated with his pace of change.  We say, ‘Keep your change. We’ll keep our God, our guns, our Constitution.’ ” 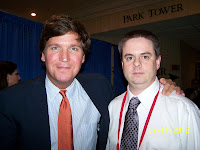 
Tucker took part in an amusing segment called the ‘fight club’ debate against Paul Begala.  I had the chance to meet Tucker for the first time, having contributed to the Daily Caller in the past and communicating via e-mail for some time now.  He could not have been a more gracious person, agreeing to two pictures and actually making me feel like an important part of the program.


Need I say anything other than, Save Us Chuck Woolery!

CPAC was far and away the most exciting political event in my lifetime, and it was a humbling experience to take part in.
Tags
Allen West Andrew Breitbart Mitt Romney Newt Gingrich Rick Santorum Tucker Carlson