Just when you thought the Hillary Clinton e-mail scandal was going away, along comes another development.

A federal appeals court revived a pair of lawsuits seeking to have the government recover more emails from a private server which was set up in her bathroom while serving as Secretary of State.

Watchdog groups Judicial Watch and Cause of Action both filed suits in 2015, demanding that the Clinton email issue be referred to the Justice Department. They would then consider a civil suit that could force missing federal records to be recovered.

A three-judge panel ruled unanimously that the suits were erroneously thrown out by a lower court judge.

In a new legal development on the controversy over former Secretary of State Hillary Clinton’s emails, an appeals court on Tuesday reversed a lower court ruling and said two U.S. government agencies should have done more to recover the emails.

The ruling from Judge Stephen Williams, of the U.S. Court of Appeals for the District of Columbia Circuit, revives one of a number of legal challenges involving Clinton’s handling of government emails when she was secretary of state from 2009 to 2013.

Clinton, the 2016 Democratic presidential nominee, used a private email server housed at her New York home to handle State Department emails. She handed over 55,000 emails to U.S. officials probing that system, but did not release about 30,000 she said were personal and not work related.

The email case shadowed Clinton’s loss to Republican Donald Trump in the Nov. 8 presidential election. Trump, who had repeatedly said during the bruising campaign that if elected he would prosecute Clinton, said after the election he had no interest in pursuing investigations into Clinton’s email use.

Oh, and Clinton’s problems grow even more perilous when you consider this: the ruling requires the Attorney General to intervene supervising the release of the emails. Yes, Trump’s Attorney General.

The ruling states that the Federal Records Act, “requires the agency head and Archivist to take enforcement action through the Attorney General if those (search) efforts are unsuccessful.”

As the Daily Caller reports, the court has offered President-elect Donald Trump “an opportunity to intervene in the controversial case” by providing “a new opening to Trump and his attorney general designate, Alabama Republican Sen. Jeff Sessions.”

Trump famously declared during a presidential debate that Clinton would “be in jail” if he were in charge of the justice system, though he has since backed off of those comments since winning the election.

Comment: Does this development give Trump and Sessions an opportunity to go after Clinton for her e-mail scandal? Would they? Share your thoughts below.

Former GOP Gov Candidate: I Want Barack To Die, And Michelle To Become A Male Gorilla 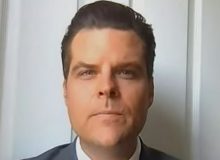