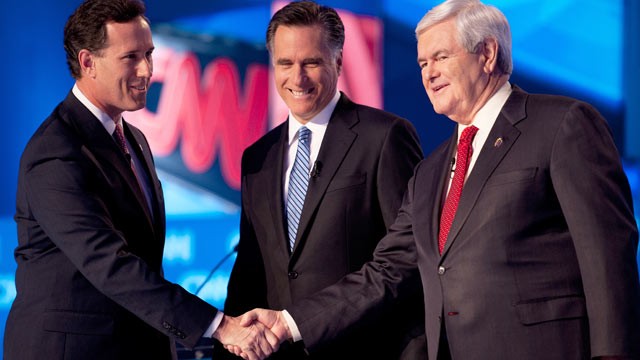 The main question is, which one of these gentleman would submit to playing the role of vice-President?

A Gingrich staff senior adviser tossed out the idea of a Newt/Santorum ticket on Tuesday.  While this would certainly cause problems for camp Romney, it seems highly unlikely to happen.  I just can’t see either of these guys playing second fiddle to the other at this stage of the game, however.

A senior adviser to Newt Gingrich told The Huffington Post Tuesday night the campaign likes the idea of Rick Santorum and Gingrich running on the same ticket for the presidency and vice presidency.

“Newt Gingrich and Rick Santorum would make a powerful team against Barack Obama,” the adviser said on the condition that his name not be used. “They have the capability to deny Gov. Romney the nomination.”

The proposal comes after rumors of a Gingrich alliance with Texas Gov. Rick Perry surfaced earlier this week. It does not come off as a sign of confidence. Rather, it is an indication that the Gingrich campaign senses their candidate’s position in the race slipping after the former House speaker’s losses to Santorum in Mississippi and Alabama on Tuesday night.

Real possibility or just talk?  What say you?