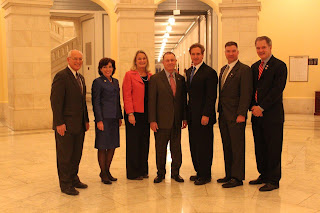 That State of the Union last night was uninspiring, boring, and an utter mess.  We don’t need to fear voters being fooled by quasi-inspiring speeches during the next campaign, that is for sure.  The President has clearly lost the only skill he ever possessed – an ability to read off a teleprompter.
The President tried to lay out his economic vision by sandwiching the bulk of the speech between two stories that ‘spiked the football’ on Osama Bin Laden?  The speech meandered with no real path to follow.
What’s more is, he doubled down on just about every failed platform he has introduced in the last 3 years, giving the Republicans a plethora of material to work with leading into 2012.
He backed up the auto bailouts, including recognition for GM despite the cost of nearly $15 billion to American taxpayers.  He used Ford as an example, despite the company having never taken the bailout.  He doubled down on companies such as Solyndra, that went bankrupt despite a $535 million loan from the government.  He blamed his predecessor for the current economic state, but failed to recognize his role in the troop withdrawal from Iraq.  He touted more spending, more spending, more spending…
In short, the President is nothing more than a used car salesman, willing to dress up any lemon with a slew of lies and half-truths.
Congressman Darrell Issa had this to say about the State of the Union:

“The President tonight outlined a laundry list of popular programs without regard to what they cost and his own record in office.

“He has failed to deliver on economic growth promises, has squandered $800 billion in stimulus funds, and vetoed jobs and affordable domestic energy bills passed by Congress.  What is clear is that he is pursuing a partisan class-warfare agenda aimed at dividing the American people.

“The American people deserve an efficient, effective government that works for them.  I am ready to work with the President to cut the regulations and red tape that make it harder for workers and businesses to succeed, to confront the irresponsible overspending by this President and preceding Administrations, and to keep America competitive in a global economy.”

“I firmly believe 2012 has the potential to be a year of growth and recovery for our country, if we make the right choices.  Specifically, I think there are five areas with which we can find common ground.  They include: comprehensive tax reform that creates a simpler and more fair tax code, regulatory relief, the expansion of domestic energy production, infrastructure investment, and bureaucratic consolidation and reform.  These are all areas which will directly help our country’s hardworking families, small business owners, and farmers, while ensuring our nation returns to a path of fiscal responsibility.  My constituents want Washington to achieve results and I’m confident that, working together in an era of divided government, we can do just that.  Additionally, as a former soldier, I appreciated the President’s recognition of the fine work our men and women of the military have conducted as well as the parallel he drew between their missions around the world and what we need to accomplish here at home.”