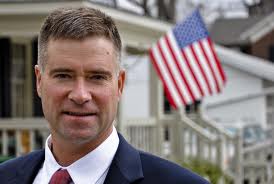 In the wake of the recent fiscal cliff deal, a jubilant White House bragged about breaking the Republican’s no-tax pledge, referring to their victory as “one of the most consequential policy achievements of the last couple decades”.
But New York Congressman Chris Gibson, who had already hinted that he would not be beholden to the Grover Norquist no-tax pledge that he signed a mere two years earlier, doesn’t quite see it that way.
In a statement released shortly after the Senate passed legislation that would avert the fiscal cliff, Gibson said “I support this bill and voted ‘yes’ as it provides much needed tax relief for over 99% of my constituents.”
That statement places Gibson – a Republican – squarely on the side of his Democrat colleagues in the Empire State, in claiming that the legislation would only raise taxes on the wealthiest 1% of Americans.
But is this really the case, or is it another example of Gibson only working with ‘half’ of the facts?
First, in November, Gibson provided an embarrassing half-wit cop out for how he could go back on his no-tax pledge in the first place.
The National Review reported:

Representative Gibson now says he signed his pledge in 2010 when he was a candidate for Congress. But the pledge was made to the people of New York’s 20th congressional district.  Since then, the new Census mandated a redrawing of the district lines which included changing the number of the district Gibson was in.  So his office now claims: “Congressman Gibson doesn’t plan to re-sign it for the 19th Congressional District, which he now represents (the pledge is to your constituents of a numbered district).”

The absurdity of that statement was so egregious that Mr. Gibson should have issued an apology to the roughly 50% of District 20’s constituents that still fall under his representation for not keeping his pledge, and a separate apology to his new constituents in District 19 for insulting their intelligence.

Second, Gibson followed through on his no-no-tax pledge by casting a half-wit vote for a fiscal cliff bill that FreedomWorks President Matt Kibbe referred to as “an epic fail”. Gibson’s vote supported an ill-conceived bill that Kibbe explains will “raise income tax rates for individuals earning more than $400,000 a year”, and it was a vote cast in haste – only three minutes after being introduced to the Senate.

Finally, Gibson has resorted to justifying such a poor decision by spouting off half-truths in defense of his legislative vote.  While income tax rates will indeed only rise for the top 1% of earners as he claims, the bill’s unwillingness to address an extension of a two-year-old payroll tax break means a significant majority of all Americans will be paying a good deal more in taxes to the federal government this year.
The New York Times reports:

“… lawmakers’ decision not to reverse a scheduled increase in the payroll tax that finances Social Security, while widely expected, still means that about 77 percent of households will pay a larger share of income.”

This was according to an analysis performed by the Tax Policy Center, a nonpartisan research group.
KRMG News spells it out in simpler terms:

That is a significant chunk of change on people who cannot exactly be classified as affluent, and are people that likely fall inside that ‘99% of constituents’ that Gibson claims to have protected with his vote.
By focusing on the income tax aspect of the legislation while ignoring the payroll tax angle, Gibson has joined the ranks of his Democrat colleagues in perpetuating a ‘smoke and mirrors’ myth about the benefits of the fiscal cliff bill for their constituents.
It is a half-truth to say that taxes will only go up on the rich.  Insert the other half of the facts, and the reality becomes much clearer – taxes will be going up for a clear plurality of Americans.
While Congressman Gibson and other Republicans squirm in their attempts to justify a vote for capitulation to the President’s desire to raise taxes, perhaps Politico says it best:

Gillibrand Says She Wouldn’t Detain Illegals At All, Simply Release Them Into the Community