And CNN legitimately wonders why they keep getting hammered with the label of ‘fake news.’

Political commentator Ana Navarro tweeted a photo designed to prove a point about President Trump and Republicans just being a bunch of old white men deciding what happens in America.

“10 old straight white men met in Camp David to set the legislative agenda for America,” she wrote, accompanied by an image of Trump and a group of congressmen and administrative members.

She then corrects the record, facetiously noting that “Paul Ryan isn’t old” and that “Trump leans more towards orangey hues.” 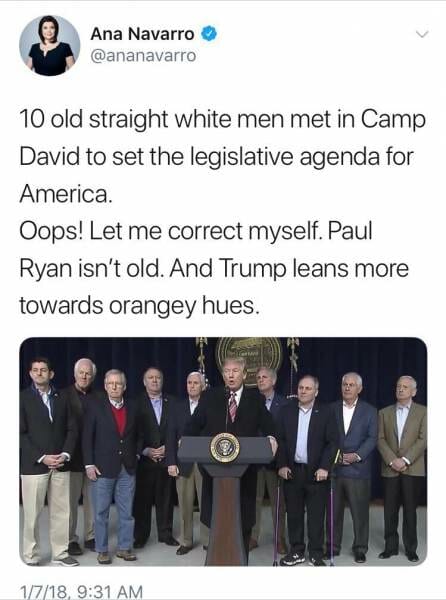 Problem being, there weren’t only white men in attendance.

Navarro appears to have removed the above tweet. Any guesses why?

Because the full-width shot of those speaking at the podium includes a woman. Not just any woman, but a very prominent woman in the Administration – Secretary of Homeland Security Kirstjen Nielsen.

Show of unity after “Fire and Fury?” pic.twitter.com/l6uwOKZjef

Navarro had to sheepishly retract her original tweet but still managed to downplay it by saying it was just one woman.

“Correction: 10 older white men and one woman met in Camp David to set the legislative agenda for America 2018,” she wrote. “Yup. So very representative.”

Correction: 10 older white men and one woman met in Camp David to set the legislative agenda for America 2018. Yup. So very representative. https://t.co/JxisVRJlVt

One woman? Well, Ana, you’re not exactly correct on that front either. Education Secretary Betsy Devos was also in attendance at Camp David.

Great weekend at Camp David. After big wins on tax cuts, ObamaCare mandate repeal, and conservative judges, the President and Republicans in Congress are united like never before and delivering on our promise of greater prosperity, better jobs, & higher wages for all Americans.

.@ananavarro has literally cut off part of a picture to take a shot at @realDonaldTrump. pic.twitter.com/0rmTbd0uJU

CNN used a woman who is a fake Republican – she voted for Hillary Clinton – to promote a fake image and create a fake story about supposedly anti-women Republicans.

How CNN of them.

Is it any wonder they are the current world champions of fake news?

Is CNN a legitimate source of news? Tell us what you think below!