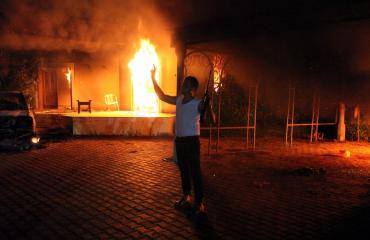 No wonder Fox News crushes in ratings.  They actually do the job of journalists.

A new secret cable has been revealed that shows Hillary Clinton’s State Department was warned less than a month in advance of the Benghazi terror attack, that security personnel at the consulate had deep concerns that they could not withstand a coordinated enemy attack.

Notice that they did not say that they couldn’t withstand a spontaneous protest over a video.  But rather, they could not withstand a coordinated terror attack.  Something in which four Americans fell victim to less than a month later.

The U.S. Mission in Benghazi convened an “emergency meeting” less than a month before the assault that killed Ambassador Chris Stevens and three other Americans, because Al Qaeda had training camps in Benghazi and the consulate could not defend against a “coordinated attack,” according to a classified cable reviewed by Fox News.

Summarizing an Aug. 15 emergency meeting convened by the U.S. Mission in Benghazi, the Aug. 16 cable marked “SECRET” said that the State Department’s senior security officer, also known as the RSO, did not believe the consulate could be protected.

“RSO (Regional Security Officer) expressed concerns with the ability to defend Post in the event of a coordinated attack due to limited manpower, security measures, weapons capabilities, host nation support, and the overall size of the compound,” the cable said.

According to a review of the cable addressed to the Office of the Secretary of State Hillary Clinton, the Emergency Action Committee was also briefed “on the location of approximately ten Islamist militias and AQ training camps within Benghazi … these groups ran the spectrum from Islamist militias, such as the QRF Brigade and Ansar al-Sharia, to ‘Takfirist thugs.’” Each U.S. mission has a so-called Emergency Action Committee that is responsible for security measures and emergency planning.

The details in the cable seemed to foreshadow the deadly Sept. 11 attack on the U.S. compound, which was a coordinated, commando-style assault using direct and indirect fire. Al Qaeda in North Africa and Ansar al-Sharia, both mentioned in the cable, have since been implicated in the consulate attack.

The report then summarizes the implication in having this secret cable perfectly:

“It was a direct warning to the State Department that the Benghazi consulate was vulnerable to attack, that it could not be defended and that the presence of anti-U.S. militias and Al Qaeda was well-known to the U.S. intelligence community.”

State Exchanges – Is This Our Last Hope Against Obamacare?

Flashback: Despite Some of the Strictest Gun Laws in Country, Shootings in Chicago Have Soared

Keystone Less of a Risk Than Pipelines Already in Place, Experts Say