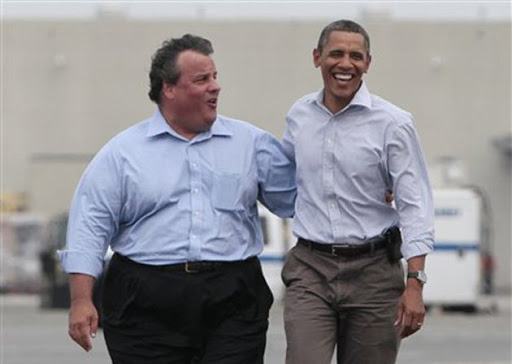 New Jersey governor Chris Christie continues to make a fool of himself while residents of his state suffer.

Christie, who claimed that his state and the people that lived there were his number one priority in trying to explain away an over-the-top embrace of President Obama just prior to the election, decided that everyone was well off now, and this was the time to make a cameo appearance on Saturday Night Live.

Tens of thousands of New Jersey residents are without power. Many have lost homes and everything else that they have. Some don’t have enough to eat and others are struggling to stay warm.

This is not the time for a responsible leader to go do his self-promoting shtick on Saturday Night Live. But Christie seems so tone deaf that he puts his self-promotion ahead of anything else.

Yes Giuliani went on Saturday Night Live a few weeks after September 11, but that wasn’t a series of gags, it was a serious tribute to those who died in the attacks. It had very little in common with Christie showing off the same routine that he does every time he’s in the vicinity of a video camera. And at a time when New Jersey residents still need help, why is their Governor spending time on a comedy show cracking jokes about what people have been going through?

We’ve got people from Louisiana and North Carolina coming in to help New Jersey, while Christie hops from one photo op to another.

Meanwhile, in the city of Rahway, NJ, you have stories like this:

In Rahway, where many residents were still without power yesterday afternoon, 400 survival kits handed out by the Red Cross in the City Hall parking lot proved to be too few.

“All of a sudden it was like a big rush,” Red Cross worker Lauren Franklin said. “They went extremely quickly.”

For Monique Patterson, who arrived too late to get a survival kit, it was insult added to injury.

William Dickson, who works for the Union County city, said there has been little communication between authorities and residents about when PSE&G would restore electricity.

“It’s so cold at night I have to sleep with a blanket over my head and use my own breath to stay warm,” he said.

I’m sure once their power is finally restored, the freezing children in the Patterson family will find reruns of Christie’s SNL shtick to be truly hilarious.

Christie, the clown prince of New Jersey, to the good fortune of the Republican party, killed off any chance of a national run when he locked his embrace on the current President.  In the end, the joke will be on him.