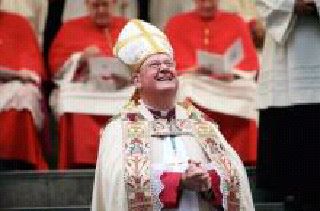 Via the AP through Weasel Zippers:

The University of Notre Dame is suing Obama administration officials over the mandate requiring most employers to cover birth control.

Other religious colleges are already suing the Health and Human Service agency and administration officials over the mandate. Still, observers had been closely watching for Notre Dame’s next step.

The university is the most prominent Roman Catholic school in the country. Notre Dame came under then unprecedented criticism from U.S. bishops and others in 2009 for inviting Obama as commencement speaker. Obama supports abortion rights.

Then we learned that dozens of other Catholic organizations were joining the fight.  There was an announcement that Cardinal Dolan of New York, and Cardinal Wuerl of D.C., had joined 40 other dioceses in a lawsuit against the Obama administration.

The Archdiocese of New York, headed by Cardinal Timothy Dolan, the Archdiocese of Washington, D.C., headed by Cardinal Donald Wuerl, the University of Notre Dame, and 40 other Catholic dioceses and organizations around the country announced on Monday that they are suing the Obama administration for violating their freedom of religion, which is guaranteed by the First Amendment to the Constitution.

The dioceses and organizations, in different combinations, are filing 12 different lawsuits filed in federal courts around the country.

The Archdiocese of Washington, D.C. has established a special website–preservereligiousfreedom.org–to explain its lawsuit and present news and developments concerning it.

“This lawsuit is about an unprecedented attack by the federal government on one of America’s most cherished freedoms: the freedom to practice one’s religion without government interference,” the archdiocese says on the website. “It is not about whether people have access to certain services; it is about whether the government may force religious institutions and individuals to facilitate and fund services which violate their religious beliefs.”

The suits filed by the Catholic organizations focus on the regulation that Health and Human Services Secretary Kathleen Sebelius announced last August and finalized in January that requires virtually all health-care plans in the United States to cover sterilizations and all Food and Drug Administration-approved contraceptives, including those that can cause abortions.

Mitt Romney has to be thrilled that President Obama is helping to galvanize Catholic voters behind the Republican.