And so it begins…

Its happening in Philadelphia – Democrats are trying to steal the election.

The Philadelphia GOP is reporting that court appointed Minority (read GOP) Inspectors are being thrown out of polling locations in several Wards.

The Philadelphia Enquirer is on it: 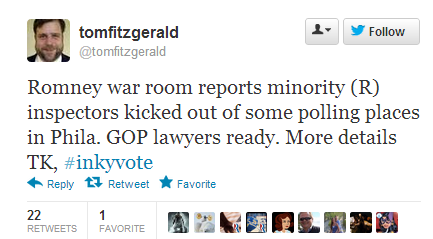 These Inspectors are election officials – again, court appointed — and are reportedly being thrown out by the Head Judges of Elections (these Judges are elected Democrats).

Philadelphia is a liberal hot bed, and will no doubt see plenty of voter intimidation tactics.  It isn’t an isolated incident either.

This has happened at the following locations:

Please, if you see any signs of illegal activity today, contact True the Vote at their Election Integrity Hotline, (855) 444-6100.

This Time, Let’s Remember the Victims