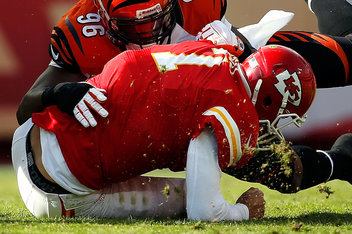 They haven’t released any names yet, but a player for the Kansas City Chief’s has reportedly shot and killed his girlfriend.  He then drove to Arrowhead Stadium where he shot and killed himself at about 8 am this morning.

Police are investigating two deadly shootings Saturday morning that they said are related.

The shootings involve a Chiefs player and his girlfriend.

It’s unknown if people were at Arrowhead or any of its surrounding facilities at the time. The Chiefs confirmed the shooting in a written statement saying, “We can confirm that there was an incident at Arrowhead earlier this morning. We are cooperating with authorities in their investigation.”

UPDATE:  Reports indicate the player is 25 years of age.  A quick scan of the roster shows these players matching that age description:

UPDATE:  The Viking Age is reporting that the player was indeed one of those on the above list – Jovan Belcher.