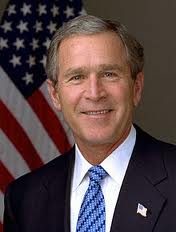 The man apparently believes he was contacted by the former President ‘spiritually’.

The Secret Service agents reportedly stopped a man who tried to get past the security gate leading into Bush’s neighborhood. He tried to follow a car that had opened the gate, sources told FOX 4 News.

The sources said the man claimed he was there to pick up a package that Bush told him to come and get. That message was conveyed spiritually, according to the man.

Dallas police are holding the man and apparently still trying to decide what to do with him.

He was carrying a gun in a locked box in his car, but he does have a concealed handgun license.

Officals are concerned about his mental state, the sources said.

At this time, the Dallas Police Department says it has no reason to hold the man, however the Secret Service is continuing to question the man for more information. They do not believe the man was a threat to the former President.

Obama: Team Romney Plays “A Little Dirty”, Time to “Put Them Away”