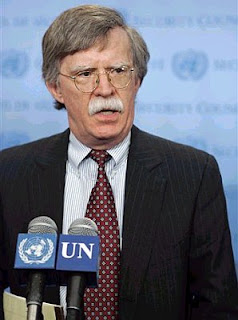 Via the Shark Tank:

Former U.S. Ambassador to the United Nations John Bolton addressed a group of predominantly Jewish Republicans that totaled about 300 in Boca Raton.  Bolton was there to shed some light on the ongoing issues in the Middle East that President Obama continues to discount or ignore, including the imminent danger posed by Iran to the rest of world were they are able to obtain a nuclear weapon.

Bolton also stated that President Obama did not have any credibility with Iran.

“We need a real President in the White House, with real credibility.”

See, from listening to the Obama campaign, I was under the impression that all other countries feared our strength because, you know … Bin Laden!

They’re Coming For Our Guns … Our Nerf Guns

Stunning Allegations: Marines in Cairo Not Allowed to Use Live Ammunition?