Ever wonder if anti-gun zealots recognize the absurdity of their argument that guns are the cause of violence in our country?

We joke about what’s next with the gun-grabbers – Once they ban all the guns in America, will they come for the knives?

(Although, that’s not really a joke because we know that’s the next logical step. Just ask London Mayor Sadiq Khan, who is trying to implement ‘knife control’ after a series of stabbings and a rising murder rate in his city.)

The left is always willing to blame the inanimate objects for being evil, not the criminals or terrorists.

And they don’t even understand why it’s such a blatantly idiotic argument.

Until now … This political cartoon illustrates how gun-grabbers can be willfully ignorant despite having the absurdity of their argument in plain sight. 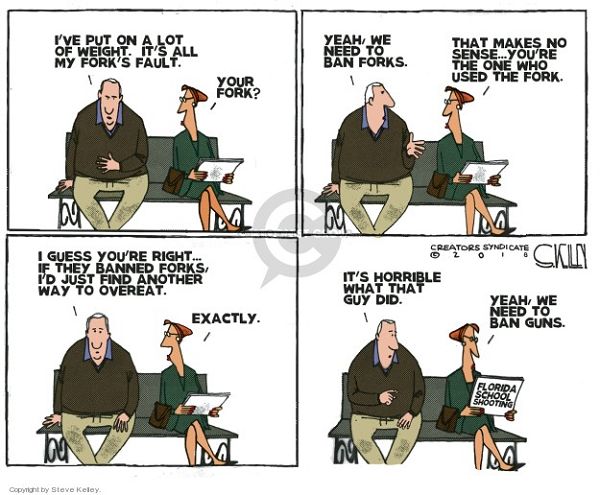 Be honest, you can almost envision that entire conversation taking place and the woman honestly having no idea why what she just said was weapons-grade stupid.

It’s not the first time a faux ban on utensils has been used to illustrate the liberal thought (or lack thereof) process in banning guns. But it’s the first time we’ve seen it done so well.

Here are some other epic examples that made us laugh …

I think that if we ban assault forks, we can solve a lot of problems. On the downside, Whoopi, Rosie and Behar would live longer. #RedWaveRising #maga #RedWaveRising2018 #tcot pic.twitter.com/9jkKZsTa2q

Seems we need to ban forks as well huh.. By some peoples logic .. pic.twitter.com/0y7hlQoiOU

And this direct shot at Mayor Khan …

With the news that Mayor Khan of London, England is working to ban Knives in the city, you can certainly understand how nervous and anxious London Forks and Spoons are today ! ?? #London #SadiqKhan #KnifeControl #Khan pic.twitter.com/PlpfULWZKc

“There is never a reason to carry a knife,” Khan said in announcing his zero-tolerance knife policy. “Anyone who does will be caught, and they will feel the full force of the law.”

And here you thought once they were done targeting guns they’d be content and leave you alone, right? While today will be guns, tomorrow will be knives, next week will be forks.

There’s nothing too stupid for the left to try and legislate and ban from our lives. Don’t put anything past them.

Kellyanne Conway: Beware, We Are Draining the Swamp