Let’s face it – cheering up a miserable Hillary Clinton can’t be easy. It could very well result in a lamp, a book, or the Bible being hurled to the head.

Bill Clinton knows this all too well.

But as a guy who’s forced to live with her and deal with her on a daily basis, it’s his duty to at least try to cheer Hillary up. She needs all the laughter and joy she can get after a humiliating loss to Donald Trump in the 2016 election, and spending the past year blaming others for her loss while hawking books in the dairy aisle at a local Costco.

What’s the best way to make her smile again? Find a story that may give her hope that she’ll eventually break that glass ceiling and win the White House in the future. 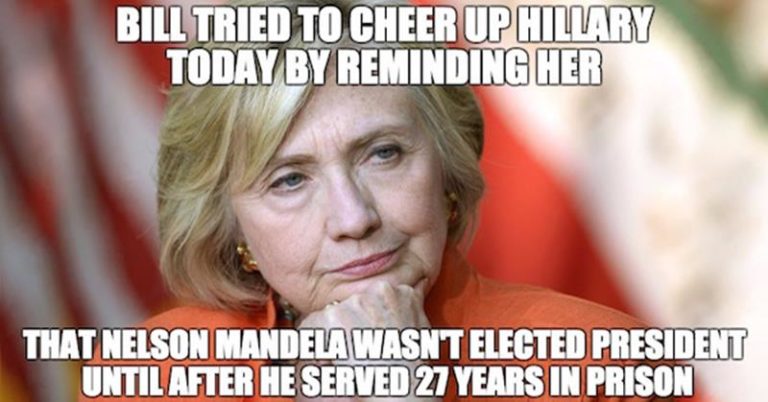 One can only hope she’ll follow that same path. At least the first part of it.

There’s certainly plenty of reasons to pursue Hillary for illegal behavior – not the least of which involves her private email server and subsequent handling of highly classified material.

There is also corruption at the Clinton Foundation, and of course, the Uranium One scandal to contend with. The latter leading one legal analyst to suggest she could be charged with up to 13 separate crimes.

.@GreggJarrett on Uranium One investigation: “Somebody’s got to go to jail over this.” #Hannity https://t.co/l6ZLBNJbcj pic.twitter.com/L0TgZ8jYT2

Fox News reported that “the FBI had evidence that Russian nuclear officials were involved in fraudulent dealings – including extortion, bribery and kickbacks – as far back as 2009” who were then part of a 2010 deal with Russia approved in part by the Clinton State Department.

Donations from interested parties to the Clinton Foundation, a $500,000 speaking fee for former President Bill Clinton in Russia, and a meeting with the dreaded Vladimir Putin around the time of the deal raised eyebrows.

Prosecutors at the Department of Justice have reportedly been asking FBI agents about a prior probe into the Uranium One scandal, possibly leading to a new investigation being opened into the matter.

“A senior law enforcement official who was briefed on the initial FBI investigation told NBC News there were allegations of corruption surrounding the process under which the U.S. government approved the sale,” one report reads. “But no charges were filed.”

What is it going to take for Hillary to have charges actually filed against her?