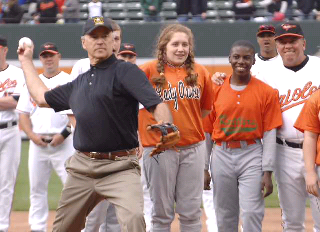 Does this mean we’ll see Tim Lincecum at quarterback?

This guy misspeaks like Rosie O’Donnell eats – messy and often.

Vice President Joe Biden had his “oops” moment Wednesday speaking in a 49er-crazed San Francisco when he told a crowd at a city political fundraiser that “the Giants are on their way to the Super Bowl.”


Biden spoke at a closed event in the city’s financial District at the Bently Reserve when he made the gaffe, according to a White House pool report released today.


The comment by Biden drew immediate “good-natured” boos from the crowd, according to the report by Josh Richman of the Oakland Tribune, who was the only local print reporter allowed to cover the event.


After suggesting that the Giants were heading to the Super Bowl, Biden quickly recognized the gaffe and and explained he was accustomed to thinking in terms of the San Francisco Giants and their baseball wins. His next reference was to the “49ers on their way” to the Big Game.

Janice Dean Mocks Cuomo For His Anti-Trump Meltdown – Is It Because the DOJ Is Investigating You?

Cuomo to Possible Ebola Victims: Now That You’ve Got Some Time, Read My Book