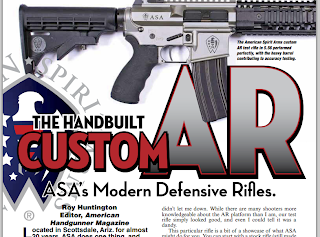 This is a little bit surreal, in that a bank which actually has the word ‘America’ in it’s title, would try to serve as judge, jury, and executioner of a small business by squashing their ability to conduct business in a free market society.

On December 29, 2011, Joseph P Sirochman, the owner of American Spirit Arms posted this on Facebook:

All,
My name is Joe Sirochman owner of American Spirit Arms and I wanted to share my recent experience with Bank of America .(which we have been doing business with for over 10 years)…. Everyone is familiar with the latest increase in guns sales , dealers selling out of inventory , Manufacturers back logged for months , large revenue all generated in the last two weeks …. American Spirit Arms is no exception to the overwhelming demand . What we have experienced is that our web site orders have jumped 500 % causing our web site E commerce processing larger Deposits to BANK OF AMERICA ..Well, this through up a huge RED Flag with Bank of America . So they decided to hold the deposits for further review , meaning that the orders/payments that were coming in through the web ,( being paid by the customer and that were shipped out by American Spirit Arms ),the BANK was keeping (UNDER REVIEW )..as you could imagine this made me furious…After countless hours on the phone with BANK OF AMERICA I finally got a Manager in the right department that told me the reason that the deposits were on hold for FURTHER REVIEW …HER EXACT WORDS WERE …
..” WE BELIEVE YOU SHOULD NOT BE SELLING GUNS and PARTS ON THE INTERNET “
…I flipped the F**k Out and told them that they have no right to make up their own new rules and regs..that we are a firearms Manufacturer with all the proper licensing FFL (Federal Firearm license ), SOT and that we follow all Federal and All States’ rules and regulations on shipping Firearms and parts ..and that we are also Audited by ATF and Homeland
Security on a regular basis … She said that she understands that but that the deposits will be released After they have a chance to review and clear them …I told her that This was unacceptable and the those deposits (that were a week old by now ) needed to be released ASAP, that we are a small business and rely on the revenue to run and stay operational.
After that being said another Manager got involved and released one of the deposits (to help out )… So far to date after
Two weeks of sales only 1/3 of collected internet sales have been released ..I am still pissed and looking for another
Bank and options …
I just thought the public should know ..
I will keep everyone posted on new developments ..
Sincerely
Joseph P Sirochman
American Spirit Arms

What bank decides to freeze the assets of a company that they may not see eye to eye with on product?  Especially when the company is operating a legal business in the United States of America?

Video: Mitt Romney Argues that President Obama is the “Outsourcer-in-Chief”