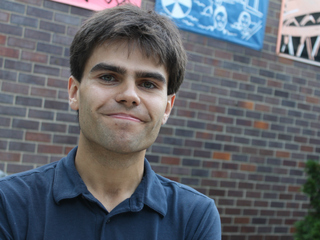 Yikes.  Arthur Fonzarelli thinks that parodies of Call Me Maybe have jumped the shark.

Adam Bermudez is a one-time reporter turned Democrat operative who is running to oust troubled Assemblywoman Naomi Rivera.  You may remember Rivera from our earlier coverage of her secret Facebook page with steamy entries regarding a government boy toy whom she hired.

While Rivera certainly has her issues, Bermudez isn’t considered a serious challenger for her seat.  But that didn’t stop Bermudez from going all out to earn the coveted teenage girl vote, releasing a video of himself singing a parody of the hit song, Call Me Maybe.

As voters head to the polls on September 13th, only a few days away, even if Mr. Bermudez’s video were to go viral, the race is still likely to be a two candidate affair between Ms. Rivera and businessman Mark Gjonaj, a heavy fundraiser who is investing his campaign war chest into extensive GOTV and advertising efforts. Also in the race is Irene Estrada-Rukaj.

“All the other candidates, they think I’m crazy,” Mr. Bermudez astutely observers at one point in the song. “Vote for me maybe.”

So here is the video which is sure to light up hearts across the nation and demonstrate once again why there is never a dull moment in New York politics.

F-35 Lightning II – The Right Tool For the Job