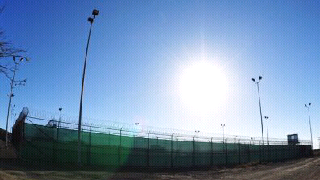 Most schools don’t have nearly $1 million dollar soccer fields, but terrorists captured on the battlefield now have that luxury.

At a time of record deficits, a new soccer field for detainees at Camp 6 in Guantanamo Bay is just getting the finishing touches — at a cost of $750,000 to taxpayers.

The project was the highlight of a tour Tuesday of the detention camp for reporters at the facility covering the arraignment in a military court of Majid Khan, a former Baltimore resident and the the only legal U.S. resident on trial at Guantanamo.

The project began in April 2011 and is due to finish this spring. The detainees will now have three recreation facilities at Camp 6, which is home to “highly compliant” detainees who live in a communal setting.

The same report indicates that Obama is granting sweetheart deals to detainees, in an anxious effort to close the camp.

Could this be another election play?  It wouldn’t be too far fetched for the President to brag about Gitmo’s closure, even though he ordered it closed one year after his first day in office.

Even some of President Obama’s most ardent supporters suggest the administration seems eager to close the camps and reduce the detainee population, and plea agreements with minimal jail time are a sweetheart deal for all involved.

Detainees like Usama bin Laden’s personal cook and his driver are spending less time in prison than American citizens prosecuted in federal courts on lesser charges.

Cutting deals with detainees, and providing them a plush soccer resort to play on in between their video games and cable TV.

This is appalling to say the least.