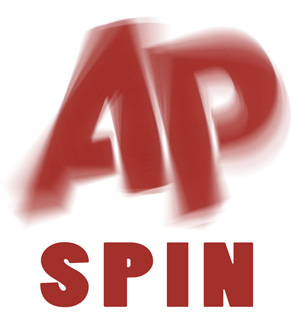 Just another case of the old media trying to remain PC in dealing with radical Islam, at the risk of avoiding facts…

From the Daily Caller:

More than a decade after the terror attacks of Sept. 11, 2001, the Associated Press doesn’t seem prepared to definitely pin the blame on al-Qaida, at least in print.

In an article published late Monday night about a mock movie poster warning that al-Qaida wants to return to New York City, the AP wouldn’t definitively state al-Qaida was responsible for the 9/11 attacks. “Al-Qaida has been blamed in the Sept. 11, 2001, terrorist attacks, which destroyed the World Trade Center and killed thousands of people,” the article reads.

Asked to respond to the “has been blamed” formulation, AP director of Media Relations Paul Colford told The Daily Caller in an email: “We don’t doubt that AQ was behind 9/11.”

… By time of publication, the Associated Press did not return TheDC’s request for additional comment explaining why, if it has no doubt al-Qaida was behind 9/11, it reported only that the terror group “has been blamed” for the attacks in print — instead of declaring that it was “responsible” for 9/11.

Disgrace: President on “Pimp With The Limp” Show to Campaign on 9/11

New Romney Bumper Sticker: Hope is Not a Strategy