By now you’ve certainly heard of Donald Trump’s lewd and disturbing comments regarding women that surfaced from over a decade ago.

Trump apologized, calling it “locker room banter” from “a private conversation that took place many years ago.”

To be clear, they are offensive and unacceptable. It’s a good thing that he apologized.

But it’s always fascinating to see selective outrage heaped upon us by liberals and the mainstream media.

After all, it’s not too hard to dig up dirt from the past to find similar ‘locker room’ talk from democrat nominee, Hillary Clinton’s husband.

In fact, some of Bill Clinton’s similarly offensive language even involved Hillary herself.

Take this report about Bill’s mistress Gennifer Flowers from the Daily Mail for example:

Gennifer said: ‘I don’t know Huma or the Weiners. I just know what Bill told me and that was that he was aware that Hillary was bisexual and he didn’t care. He should know.’

‘He said Hillary had eaten more p***y than he had.’

Clinton’s scandals also involved salacious commentary involving cigars and blue dresses. There was also that time he called Hillary a “f***ing b****.”

And vulgarity is less offensive than actions.

In Trump’s apology he stated, “I’ve said some foolish things, but there is a big difference between words and actions.”

“Bill Clinton has actually abused women and Hillary has bullied, attacked, shamed and intimidated his victims,” he said.

This is the Code Our Soldiers Live By

If Elizabeth Warren Isn’t Lying About Being Native American, Scott Brown Has A Solution to Prove It 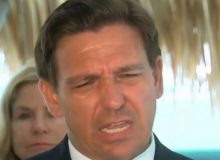