Dan Savage is a gay sex advice columnist who spearheads President Obama’s anti-bullying efforts through his It Gets Better Project.  Savage started the project in 2010 in response to a young boy’s suicide as a result of bullying over his perceived sexual orientation.

Now, if someone who was gay had been verbally abused with a comment about being a “f*ggot” or that they “grab their ankles”, that would be the type of thing Savage would vehemently oppose, correct?

Which is why it’s all the more surprising that he, himself, is the one who said it… 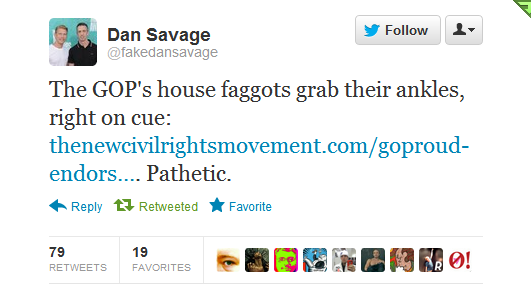 Savage’s hatred seems to come from the decision by GOProud – an organization of gay conservatives and their straight allies – as they announced today their endorsement of Mitt Romney for President.

“The Board of Directors of GOProud voted to enthusiastically endorse Governor Romney’s candidacy for President,” said Lisa De Pasquale, interim Chair of the GOProud Board of Directors and the former Director of CPAC.  “GOProud is prepared to commit significant resources to help make Mitt Romney the next President of the United States.”

How dare they support somebody who they believe represents their best interests?


Savage has a history of pretending to be a tough guy, wishing that “Republicans were all f***ing dead”, and fantasizing about “f***ing the s*** out of Rick Santorum” on the very friendly Bill Maher show.


And who could ever forget the time he got all up in the grill of high school students aged 14-18, telling them that the Bible was “bulls***”, and after they walked out on him, referring to them as “pansy a**es”?