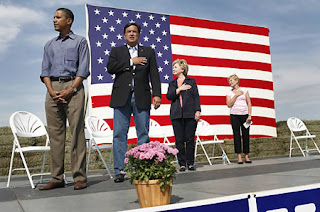 Where would you want to celebrate Independence Day?  Somewhere relatively close to home, at a local park or beach, taking in the fireworks?

Not only is the Obama campaign team planning to spend Independence Day outside of the U.S., but they’re spending it in a surrender-happy country who’s only major military victory came during their civil war.

Apparently tiring of US soil as a source of campaign dollars, the Obama campaign is headed overseas — with its celebrity friends in tow. The European Obama campaign starts next week in Paris on July 4 with a reception organized by various fundraising heavy-hitters. Independence Day fundraisers in Paris – now that’s a flag-waving campaign.

But then, France may be the ideal place for a President who’s main platform seems to be one of Anti-Americanism.

While the crux of his predecessor’s low approval ratings were in fighting an ‘unpopular war’, President Obama is watching his own approval ratings stagnate due to an unpopular, well, everything else.  His record has been so blatantly in contrast to the will of this nation, that it could very nearly be defined as anti-American.

The most obvious example of this has been the force-feeding of the health care reform bill down the collective throats of a nation.  There has been a consistently strong opposition to Obamacare even prior to it being signed into law.  The Supreme Court decision to uphold the law did nothing to change the negative perception, as 50% of Americans in a recent poll opposed the court’s decision, to 39% who supported the ruling.

This isn’t the only example of the President supporting policies that the rest of America opposes.

And it isn’t just these more recent actions that are contributing to the President’s perception as being anti-American.  Lost in the more current list of unpopular moves are some of the early attempts at implementing policies which were equally unpopular.  They include…

Then again, that would require abandoning his liberal agenda and start accepting what America is – a predominantly conservative nation.