Saw this sign in my travels up Route 40 (h/t Michael and Janice), in a tiny little place called Speigletown, NY.

Not quite sure President Obama would ever be in that area, but if he were he would be driving past an auto repair shop called Tesman’s, where he could then read the following message: 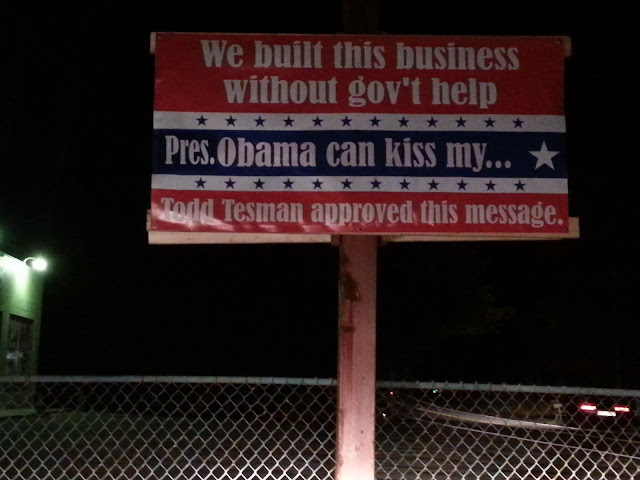 Owner Todd Tesman apparently decided it was time to send the President a message that he did indeed build his own business.
The sign is a slightly cleaned up version of one used by an owner of a Georgia lumberyard back in August, and reads:
“We built this business without gov’t help
Pres. Obama can kiss my …
Todd Tesman approved this message”
I can assure you, Todd built it with some of my help back in the early ’90s.  The business I gave him with my crappy Taurus station wagon had to be staggering.
Still, like most successful businessmen, Todd always lent a helping hand.  You didn’t have to force him to redistribute wealth, he would routinely do small and quick repairs at no cost to the customer.  Charity was a choice, not legislated by government.
From reading other testimonials, it seems Todd is still carrying on that tradition.
It just goes to show you that successful small business owners haven’t forgotten about the President’s “you didn’t build that” moment.
Tags
New York President Obama

Why Is This E-Mail From Hillary Clinton Being Called the Smoking Gun?