The same Egyptian protesters that President Obama was more than willing to support during the so-called Arab Spring, mounted an unprecedented attack on an American Embassy in Cairo yesterday.

Angry protesters climbed the walls of the U.S. Embassy in Cairo on Tuesday and hauled down its American flags, replacing them with black flags with Islamic emblems.

The incident prompted U.S. security guards to fire off a volley of warning shots as a large crowd gathered outside, apparently upset about the production of a Dutch film thought to insult the Prophet Mohammed, said CNN producer Mohammed Fahmy, who was on the scene.

An embassy operator told CNN that the facility had been cleared of diplomatic personnel earlier Tuesday, ahead of the apparent threat, while Egyptian riot police were called to help secure the embassy walls.

An embassy in Libya was also attacked.

On the 11th anniversary of the terrorist attacks of Sept. 11, the assaults were a violent reminder that the changes sweeping the region have hardly dispelled the rage against the United States that still smolders in pockets around the Arab world.

The results?  Multiple Americans were shot, while others were the victims of a rocket attack that killed the U.S. Ambassador to Libya.

The U.S. ambassador to Libya and three other embassy staff were killed in a rocket attack on their car, a Libyan official said, as they were rushed from a consular building stormed by militants denouncing a U.S.-made film insulting the Prophet Mohammad.

Gunmen had attacked and burned the U.S. consulate in the eastern city of Benghazi, a center of last year’s uprising against Muammar Gaddafi, late on Tuesday evening, killing one U.S. consular official. The building was evacuated.

The Libyan official said the ambassador, Christopher Stevens, was being driven from the consulate building to a safer location when gunmen opened fire.

Believe it or not, the response coming from the U.S. Embassy in Cairo included an apology to the extremists who had carried out the attack.

I’m going to say that again.

The Obama administration apologized to terrorists who had burned down sovereign American buildings and killed an American citizen.

The statement from the Embassy in Cairo actually apologized for “religious incitement” and for “hurting the religious feelings of Muslims”.

I wish I was making that up.  Here is the statement: 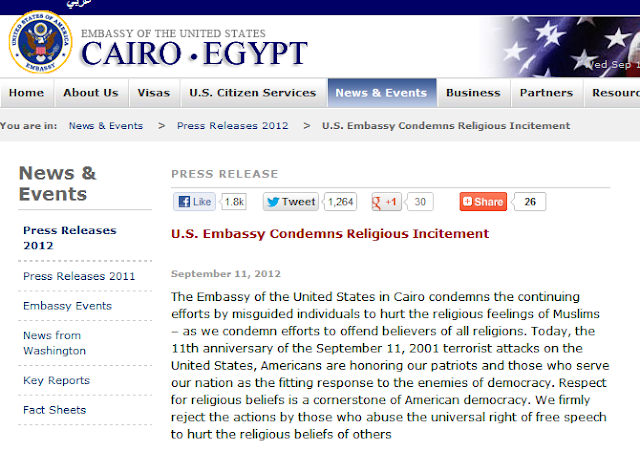 Have you ever in your life thought, after two U.S. embassies were attacked and seized by radical Islamists, in which multiple Americans were shot – one fatally – and an embassy was nearly burned to the ground, exactly 11 years to the day after the worst terrorist attack in American history perpetrated by similar radical Islamists, that you would ever see an administration actually issue an apology for ‘hurting the religious feelings of Muslims’?

Oh I know they’re trying to walk it back now, but weakness has already been shown. This will go down as the single most cowardly and disgraceful response to an attack on the fundamental American right of free speech in modern history.

Worse, it crossed the bounds of a mere protest when an American was shot and killed. It is a terrorist attack. And we apologized.

President ‘Gutsy Call’ is now officially operating under a foreign policy platform in which we as a nation are subservient to terrorism and slaves to appeasement.

Indeed, the administration is working fervently to backpedal on the apology, 17 hours after the fact.  But the damage is done.

The Obama administration is disavowing a statement from its own Cairo embassy that seemed to apologize for anti-Muslim activity in the United States.

“The statement by Embassy Cairo was not cleared by Washington and does not reflect the views of the United States government,” an administration official told POLITICO.

The embassy came under widespread criticism for failing to defend free speech in the face of threats of violence. Egyptian protesters rioted anyway, breaching the embassy walls and tearing down the American flag.

The criticism has been warranted.  This may go down as one of the most embarrassing days in foreign policy history, and proves that having ‘we killed Osama bin laden’ as your biggest foreign policy platform isn’t enough.  Amateur hour in the White House needs to end in November.

Bozell: “If Chris Matthews Could Carry Barack Obama’s Next Child He Would”