Some even suggested she was channeling President Trump when she challenged the United Nations with seven stark words:

“Don’t let ISIS get away with genocide.”

Clooney is a very accomplished international human rights lawyer who represents victims of the Islamic State.

She stood up for those victims in ways that probably shocked the UN. And it was spectacular.

“I am speaking to you, the Iraqi government, and to you, U.N. member states, when I ask: Why? Why has nothing been done?” she demanded.

Amal Clooney tells UN meeting not to let ISIS 'get away with genocide' in Iraq. "Don't let this be another Rwanda." https://t.co/YAOybD94P3 pic.twitter.com/ZAImrPoquc

Amazingly, the media didn’t seem to care that a Muslim lawyer just hammered the UN for failing to stop ISIS. Instead, they cared more about who she was accompanied by at the speech, what she was wearing, and checking out her “baby bump.”

Just look at these ridiculous headlines: 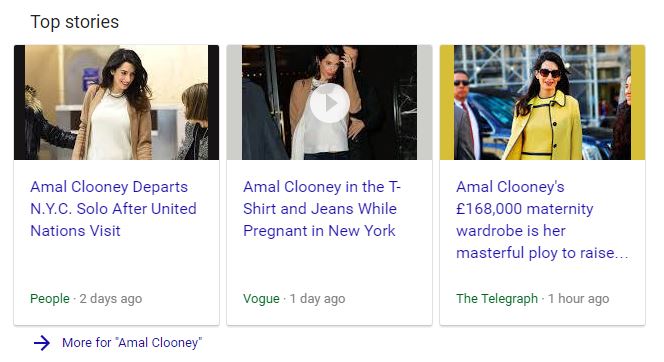 It was so bad, even the Washington Post was disgusted at the media’s inattention to Clooney’s important message.

“It was a day after International Women’s Day, and a renowned female lawyer was giving a powerful speech addressing one of the world’s most pressing humanitarian threats,” the Post wrote.

“But a number of headlines seemed to focus elsewhere: her baby bump. And her daffodil-yellow dress and matching coat. Oh, and in case anyone forgot, she’s married to Hollywood movie star George Clooney.”

That Hollywood movie star once predicted that Donald Trump didn’t have a chance to win the presidency.

“There’s not going to be a President Donald Trump,” Clooney said.

Ironically, it’s President Trump desire to eradicate ISIS that may be the only hope for his wife’s demand to do something.

(VIDEO) Karma: Enraged Trump-Hater Gets in Fender Bender While Yelling at a MAGA Rally, Ticketed by Police

SHOCKING REPORT: Dozens of Afghan Troops Training in the US Have Gone Missing