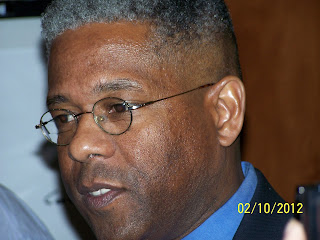 As usual, West needs no further commentary.  The man is a perpetual machine of wisdom.

Freshman Rep. Allen West (R-Fla.) on Wednesday evening praised the Republican Party for consistently fighting for individual freedom over the last 150 years, and criticized Democrats for pursuing “handouts” to the less fortunate that he said are a modern form of slavery.

“Our party firmly believes in the safety net,” West said in a late Wednesday floor speech. “We reject the idea of the safety net becoming a hammock.”

“For this reason, the Republican value of minimizing government dependence is particularly beneficial to the poorest among us,” he continued. “Conversely, the Democratic appetite for ever-increasing redistributionary handouts is in fact the most insidious form of slavery remaining in the world today, and it does not promote economic freedom.”

West recounted the history of the Republican Party by noting that it played a major role in several key moments in which it fought for greater freedoms for African Americans. “The Republican Party has always been the party of freedom,” he said.

Among other events, he noted that Republican President Abraham Lincoln signed the Emancipation Proclamation, and the GOP pushed the 13th, 14th and 15th Amendments to the Constitution that ended slavery, provided equal protection under the law, and gave blacks the right to vote.

He added that a Republican Congress passed the law establishing the Buffalo Soldiers, and that GOP President Ulysses Grant signed the first major civil rights act into law in 1875.