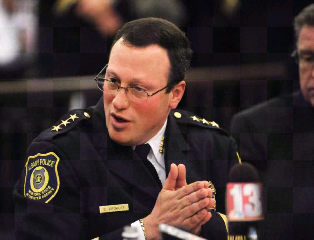 I’d like to introduce everyone to my new favorite police chief in the entire country, Steven Krokoff of the Albany Police Department.

Krokoff was recently summoned before the Albany Common Council to explain his department’s actions during the Dec. 22 showdown between police and Occupy Albany protesters in Academy Park.  Apparently the council is no fan of allowing police officers the ability to defend themselves in the line of duty.

The following is one of the most epic verbal a** kicking’s that I have ever had the pleasure of hearing.

Courtesy of the Times Union:

Krokoff aimed his most scathing words at two council members in particular, Anton Konev and Lester Freeman, who have been vocal critics of the department in the wake of both incidents — Konev as a staunch supporter of Occupy Albany and Freeman as the representative of the South End.

“Shame on Councilman Konev and Councilman Freeman, who at every turn, seem so willing to distort the truth of any situation, no matter how tragic, and use it for their own personal gain,” Krokoff said.

“Shame on you both for mattering so little to yourselves and your community that you have to create hate and further half-truths just to feel some sense of relevancy. This entire city has seen the content of your character, and I pity you both.”

Kudos to Chief Krokoff for showing the community that at least one man is unwilling to play political games with his officer’s lives, just for the sake of placating attention-seeking degenerates.  He is the anti-David Soares.

Incidentally, I e-mailed the Times Union earlier this week to ask if they thought it pertinent information that some members of the Common Council that are criticizing the Albany police, were vociferously participating in the Occupy Albany assembly.

Shockingly, I have yet to hear back from them.

Photo Courtesy of the Times Union

Poll: Economy the Most Important Issue Heading into 2012 Election