A publication known as The Root ran an analysis of the upcoming debate strategy for the Romney campaign, and asked the following question in it’s headline – Will Romney Reach out to Racists in Debates?

Upon first viewing the article in question, one might think that it’s just a leftist blogger on a small site asking an inane question.

However, The Root is a publication owned by the Washington Post and as such, the inflammatory headline actually ran on the home page of the Post on Saturday afternoon as a “Top Headline”. 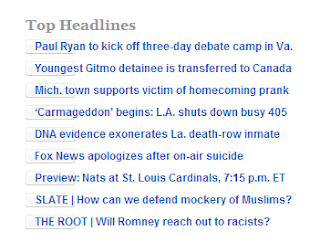 Here is a bit of the argument presented by author Keli Goff:

In 2008 something remarkable happened: America elected a black man with a Muslim-sounding name president. The even more remarkable part? That he beat a white war hero from an American military dynasty.

But there are plenty of political watchers who believe this turn of events happened only because the war hero was not willing to engage in the political equivalent of nuclear warfare with his opponent.

As related in Game Change, the best-selling book about the 2008 presidential election, Republican nominee Sen. John McCain was pressured by his campaign advisers to exploit the controversy surrounding comments by then-Sen. Barack Obama’s longtime pastor, Rev. Jeremiah Wright. As told in the book, McCain — still haunted by some of the negative campaigning invoking his foreign-born, adopted daughter during the bruising 2000 GOP primary, in which he was eventually beaten by George W. Bush — eschewed their advice. The rest, as they say, is history.

Goff then goes on to question if Romney will do what McCain was unwilling to – start questioning Obama’s relationship with the Reverend Jeremiah Wright.

Of course, this premise is flawed in a manner that a middle school student could see right off the bat.  The argument only works if somebody believes that the only type of person that could call into question Obama’s relationship with the controversial (and racist) reverend, is a flat-out racist.

This is an unacceptable premise for a journalist.  Jeremiah Wright, and by extension a man that sat in his church for twenty years listening to his racist, America-bashing, intolerant sermons, is fair game for exploration.  Or at least should be by the media.

But this author simply puts any investigation into the controversial relationship into a category of racist.

Now the Romney campaign finds itself at a crossroads. With just over a month to go before the election, the question becomes: Will he be willing to do what McCain wasn’t, in order to win at any cost? Will he give in to the temptation and begin lacing his ads and language with messages to appeal to those who miss the days of the Southern strategy — and the days of a white Republican president?

Sorry, but I’m willing to bet the southern strategy isn’t to put a white President back in office, but rather one who has the experience to get the job done, to improve the American economy and recover our standing as a revered country around the world.

There’s only one candidate in this race with that kind of experience, and it isn’t Mr. Obama.

It’s experience, not race Ms. Goff.  And the fact that you can’t see past the President’s skin color to accept that fact makes you … a racist.

Poll: Whose Economic Policies Are Most Responsible For the Country’s Current Fiscal Problems?